'Red Notice' is being reviewed by netizens and critics on Twitter. First opinions on Dwayne Johnson-Gal Gadot-Ryan Reynolds-starrer out. 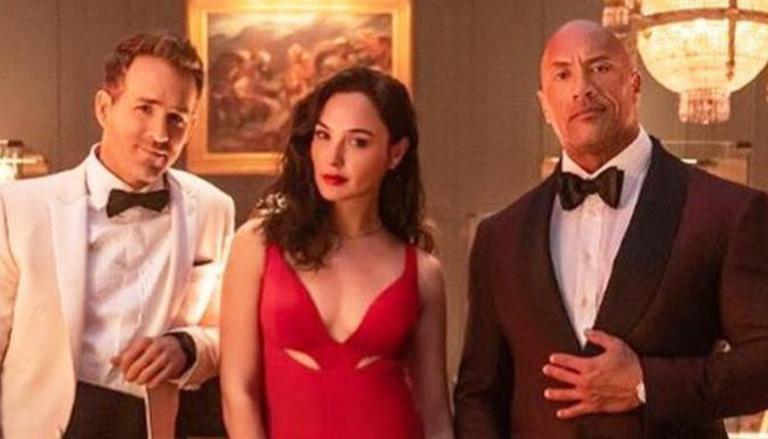 
Three top stars in one frame could be an attractive sight for many audiences. Add to that, an interesting plot, at least on paper, some one-liners, stylish costumes and action sequences. That's what Dwayne Johnson, Gal Gadot and Ryan Reynolds-starrer Red Notice is about or attempts to do.

Ahead of its release on Friday, reviews started pouring in for the action-comedy. The initial impressions were mixed, as one section lapped up the visuals on display and another was not too pleased. Here's what netizens and critics had to say about Red Notice:

Some of the terms used by netizens, who were lucky to catch Red Notice before the general audience were 'absolute blast to start to finish', 'fun movie', 'National Treasure meets Rush Hour' and that it was a heist-comedy combo, which had a lot of  'unexpected twists and turns.' Dwayne-Gal-Ryan made for the 'perfect trio', some felt.

There was a mention for the plot, action, 'incredible acting', 'Lol Comedy' and 'fantastic pacing' was another term used for it. One, who was a fan of the trio, planned to watch it many times and could not wait for the sequel.

READ | Netflix is ready to serve 'Red Notice' in the latest trailer; Watch

#RedNotice What a great movie! So fun! Thank YOU for the pre-screening message @TheRock! What better way to spend an evening watching a fantastic film with you & 2 more of my favorite actors! @VancityReynolds & @GalGadot #12DaysofRedNotice Don’t miss this Nov 12 on @netflix pic.twitter.com/YXwJBuY0bw

#RedNotice was so fun to watch! I loved it. I’ve been a fan of all three of you for years. It was awesome! I plan to watch many more times and I’m waiting for a sequel! Thanks @TheRock @VancityReynolds @GalGadot Great movie! @Cinemark

Some of the critics, however, were not at all impressed. One critic did not mince words in saying 'it sinks' and that the result was 'depressing.' 'Most soulless film of the year', read another critic's comment. 'Empty approximation of the conventional Hollywood blockbuster' was another hit for the makers and that Netflix was betting on audiences 'willfully trading quality over convenience.'

READ | Gal Gadot opens up about shooting 'Red Notice' amidst pandemic, says 'it was crazy'

Another critic called it a 'disappointing effort', hoping that the makers do not turn it into a franchise. One critic was giving a 'zero' rating for the first time and added that there was 'nothing redeemable about this artistically bankrupt “blockbuster.”

Another wrote that the movie was one of the 'lazy blockbusters' that banked on the charm of the stars to see it through, but it only turned out to be 'sleek,' but 'dull' since the trio do not click together.

RED NOTICE: It stinks! I think Netflix is responsible for some great stuff. I also think their “quantity over quality” approach is depressing and results in expensive crap like this. Here’s my review: https://t.co/cQVzdSx8T0

Red Notice is the most soulless film of the year. https://t.co/608D1XQKyL

Review: As feared, #RedNotice is a soulless and empty approximation of the conventional Hollywood blockbuster, with Netflix betting on audiences willfully trading quality for convenience. via @Forbes by @ScottMendelson https://t.co/FjSOFhfwiw

Dropping on @netflix tomm is the action "caper" #RedNotice starring Dwayne Johnson, Ryan Reynolds & Gal Gadot. The streamer is obviously hoping to turn this into a franchise, I am hoping they do not. My @ign review of this disappointing effort:https://t.co/uLWOkbEOcx

I’ve never given a film a zero on Metacritic before. That changed with RED NOTICE. There is nothing redeemable about this artistically bankrupt “blockbuster.” My review via @Polygon https://t.co/okQ1bglZGJ

RED NOTICE is another in a long line of lazy blockbusters hoping the charisma of its stars will be enough to make a good movie. Dwayne Johnson, Ryan Reynolds & Gal Gadot have proven they can handle big budget films on their own, but the three never click together. Sleek but dull. pic.twitter.com/8IBiJwQKPr

Some stated that there was nothing 'groundbreaking' about the movie and that it was 'silly', but overall 'fun' or 'popcorn.'

#RedNotice gets better as it goes. It tries to make you laugh more than it actually does but there are a few really great jokes. It's silly with some ridiculous action.

I had fun watching Dwayne, Ryan, and Gal be slick together & enjoyed the several fun, simple twists. Popcorn! pic.twitter.com/3LOanvbMl4

There's nothing groundbreaking here, but a comedy-action blockbuster is welcome at the same time when awards season is heating up. The Rock and Ryan Reynolds play their typical roles we know them for, and Gal Gadot is quite charming. pic.twitter.com/Uzt8GGxoZR

#RedNotice may not be groundbreaking or audacious, but it's still undeniably fun thanks to Dwayne Johnson and Ryan Reynolds.

Red Notice is a story of an FBI official gelling with two wanted criminals, attempting a heist, as they try to outwit each other. After a limited theatrical release on Friday, it releases on Netflix on November 12.