Big Little Lies fame Reese Witherspoon took to Instagram on Thursday, April 01, 2021, to share a motivational message from Canadian poet Rumi Kaur. Along with the post, the actor penned a sweet caption and fans went all gaga over the post. The message read as “I will never have this version of me again let me slow down and be with her”.

Along with the Rumi Kaur quote, Reese penned a note trying to spread positivity. She wrote, “For anyone who needs to hear this today - the seasons of life are fleeting, don't miss out on the journey right in front of you âœ¨ #rupikaur”. Take a look at the post below.

As soon as Reese Witherspoon shared the post online, fans were all happy and flooded the comment section with all things nice. Some of the users were touched by the motivational message, while some were all gaga over it. One of the users wrote, “i needed to read this! thank you for sharing”. Another one wrote, “Such wise words!â¤ï¸ Thanks for sharing”. Check out a few more comments below. 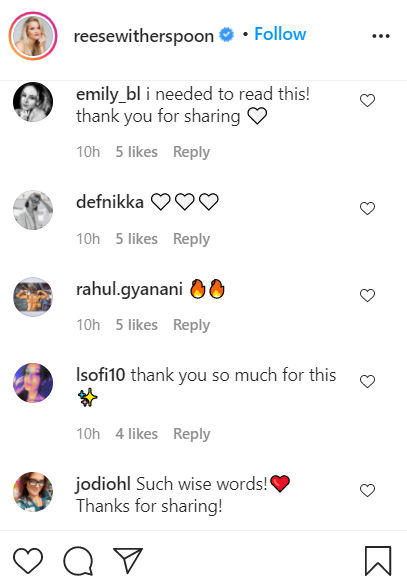 Apart from this post, the actor goes on to share several other pictures, videos, reels and much more giving fans a glimpse of her personal and professional life. Earlier to this post, the actor shared a heartfelt picture with her husband as they completed 10 years of togetherness. She shared a wedding picture where they are seen dressed as bride and groom and are all smiles in this candid picture.

Along with the picture she also wrote, “Celebrating 10 years of marriage to my sweet hubby. What a special day with all of our dear friends”. She added, “Looking back, I can’t believe it has gone so quickly! I guess that’s how it goes with 3 kids, Big LOVE, lots of laughing, non-stop travel, so many dogs, and fun adventures... figuring out this crazy world together”. Take a look at the post below.

On the work front, Reese Witherspoon has several projects in the pipeline. She will be seen in the computer-animated musical comedy Sing 2, written and directed by Garth Jennings. Sing 2 reunites Matthew McConaughey, Taron Egerton, Seth MacFarlane, Tori Kelly, Nick Kroll, Scarlett Johansson, and Reese Witherspoon with the animated animal characters they voiced in the original musical comedy. The actor will also be seen in another season of The Morning Show airing on AppleTV+.

READ | Reese Witherspoon has nothing but praises for Priyanka Chopra's 'Unfinished'; take a look