Ryan Reynolds is not a stranger to trolling his friends from the industry. And he did it again while taking a jab at Superman's moustache fiasco.

Henry Cavil's moustache debacle was one of the most noticeable and obvious flaws in the 2017 film Justice League. The superhero film went through a troubled production and had the majority of its runtime reshot from what was originally intended. When Henry Cavill, who plays Superman in the DC universe films was called back to reshoot his portions, he had grown a moustache for Mission Impossible: Fallout and was contractually obligated to not shave it. As a result, Warner Brothers decided to digitally remove Henry's moustache using CGI. The CGI replacement of Henry Cavill's moustache was too visible on the screen and it did not take much time for ardent fans and viewers to find out the truth.

Ryan Reynolds recently shared a funny commercial of an American gin brand. The video features him in a moustache which is later hidden by visible computer graphics. The actor the apologised for the joke in the caption. Henry Cavill also made a hilarious comment on the post. 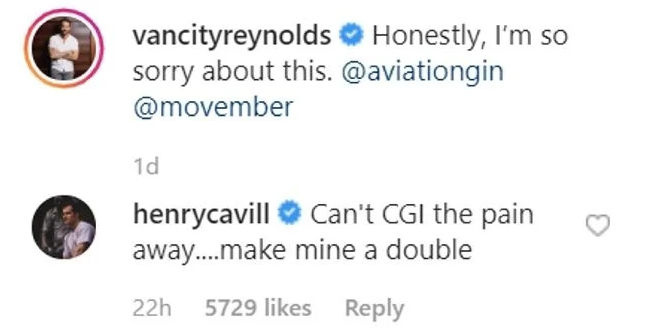 Ryan Reynolds is always seen indulging in funny banters with other celebrities on social media. The actor recently got into a banter with Robert Downey Jr over fantasy football. Earlier, Ryan took over Hugh Jackman's live show to wish him happy birthday and also sent a wonderful message along with it.

On the day of @TheRock’s much anticipated Teremana Tequila launch, I’d like to take this opportunity to congratulate myself for winning @VinePair’s best tasting celebrity alcohol brand. Next year, DJ... Love, @aviationgin pic.twitter.com/XRo1u60Jgc