Ryan Reynolds recently took to his Instagram account to share a trick to end his daughter Betty's obsession with the song Baby Shark. Check it out.


Hollywood actor Ryan Reynolds is known for his quirky humour in real life as well as on social media. Not only him, but his wife Blake Lively is also known for her humour. In the recent chain of events, Ryan took to his Instagram account to share pictures of Blake's movie Shallow. In the caption, he talked about how his daughter loves the nursery song Baby Shark and how he plans to fix it. He wrote, "My one year old daughter is obsessed with Baby Shark. All day. Every day. There’s only one way to fix this". In the comment section, Blake wrote, "She’s gonna love Savages". On the other hand, fans could not stop appreciating his humour. Check it out. 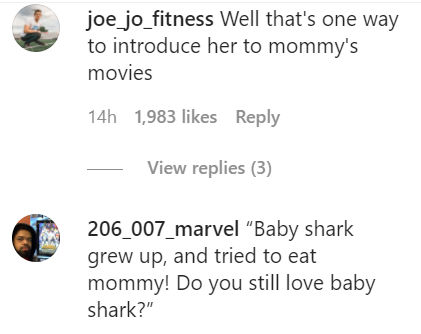 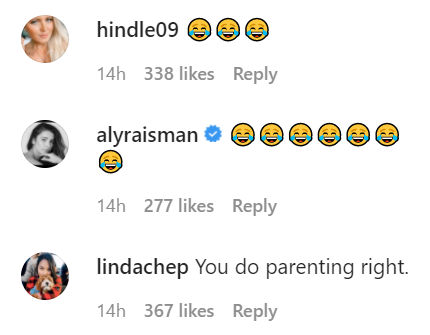 On the other hand, Blake Lively took to her Instagram story to share the post and add her reply to it. In the story, she wrote, "Well at least they'll have ample content for therapy.". She also added a gif of a shark in the story. Check it out. 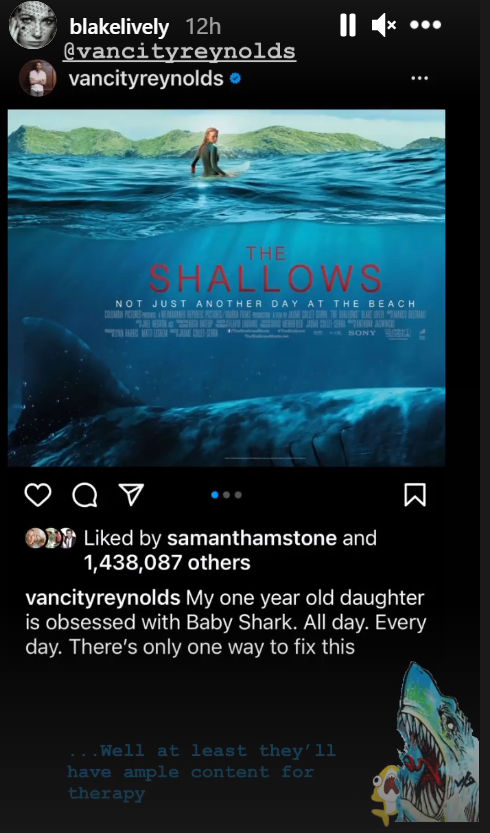 Ryan Reynold and Blake Lively met during the shoot of the movie Green Lantern. The couple decided to get married in the year 2012. They have three daughters James, born December 2014, Inez, born September 2016 and Betty in 2019. The daughter that he mentioned in his post is Betty.

The 2016 horror survival movie was directed by Jaume Collet-Serra and written by Anthony Jaswinski. The story revolves around a surfer (Blake) who gets stranded away from the shore. She must use her cleverness to survive a great white shark attack. The movie also features Oscar Jaenada and Brett Cullen in pivotal roles. The movie went on to receive a positive response from the audience and critics.

READ | Scarlett Johansson and Ryan Reynolds to not cross paths in MCU; Here's why

Ryan Reynolds on the work front

Ryan Reynolds was last seen in Netflix's action movie 6 Underground. He will be next seen in Free Guy which is a science fiction action comedy movie. He will also star alongside Dwayne Johnson and Gal Gadot in Netflix's upcoming thriller Red Notice. He is currently shooting for The Adam Project which also features Jennifer Garner, Zoe Saldana, Mark Ruffalo, Catherine Keener, Alex Mallari Jr. and Walker Scobell.