Blake Lively has been busy shooting for her upcoming film The Rhythm Section. However, the actor has now injured her arm. Now before Blake Lively went back to shooting mode, she took a look back at everything that went down in the making of the movie which includes her broken arm. She broke her arm a few weeks ago while shooting for the film and put the shoot on hold. But it has been a long time since the incident happened, and the actor has now decided to take it to her social media and share with her fans a hilarious video from the time that she was brought into the hospital.

The credit goes to her husband Ryan Reynolds for catching the aftermath of her on-set injury on video. The video shows Lively lying on the hospital bed as hubby Ryan Reynolds plays the song Wild Thing by Tone Loc. As soon as it hits the tempo, Lively comes back to life as she opens her eyes wide open and winks at Reynolds. Blake Lively had shared the video via Instagram Stories and admitted being high at the time the video was shot. Blake also mentioned that she does not remember the incident. Here is a screenshot of what the actor had posted on her Instagram story: 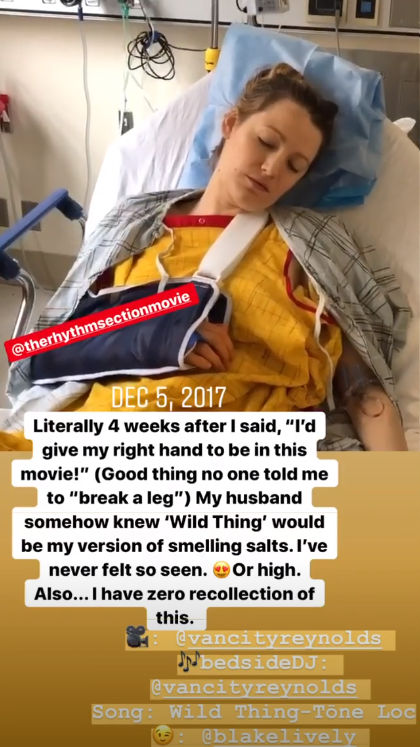 For those unaware, Blake Lively will be next seen portraying the role of Stephanie Patrick in her upcoming film The Rhythm Section. The film will see the actor go undercover and find out the truth behind a plane crash that killed her family. The Rhythm Section is a modern-day adaptation of writer Mark Burnell’s Stephanie Patrick series. Here is the official trailer of the film that came out a while ago: