Actor Sophie Turner and singer Joe Jonas got married on May 1, 2019, in Vegas. Celebrating their two year anniversary, the stars shared posts wishing each other


Sophie Turner and Joe Jonas celebrated their wedding anniversary on May 1. As wishes were pouring in for the stars, Sophie Turner and Joe Jonas took to their social media and wished each other on their second wedding anniversary. The star couple got married during a surprise ceremony in Las Vegas back in May 2019, after the Billboard Music Awards and two months before their southern France wedding.

The Game Of Thrones actor shared a series of adorable pics with her husband, Joe Jonas. These unseen pictures also included glimpses of Joe and Sophie's Vegas wedding. In the first image, the lovebirds are seen in the pool. The next few images are from their wedding party in Vegas. You can also spot Sophie and Joe Jonas' friends and family in these pictures. You can also spot famous personalities like Diplo and Priyanka Chopra Jonas.

Sharing the series of throwback pictures with Joe Jonas, Sophie Turner said, "Happy 2 year Vegas Wedding anniversary to this big ol hunk of man meat". Meanwhile, on the other hand, Joe Jonas also shared some adorable throwback images from their wedding in Vegas. As seen in these pics, Sophie stunned in a wedding jumpsuit, instead of a gown. Joe was spotted in a grey checkered suit. Sharing these pics on Instagram, he said, "Married as F@$K for 2 years! Love you bub".

One of the users wrote, "Omg! Happy anniversary", while another added, "angels. love this so much". A fan comment read as "Dam this looks fun 🙌👏 happy anniversary". Another fan commented, "Cutest couple ever. Want a Joe to my Sophie, or a Sophie to my Joe. Whatever. Love you". Check out more fans' reactions below. 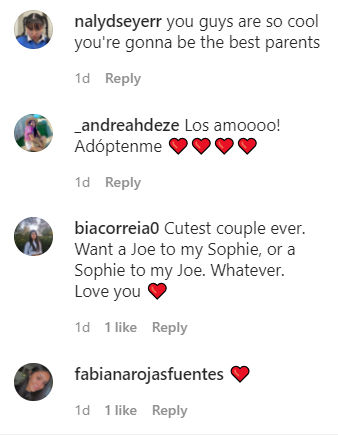