Spider-Man No Way Home star Tom Holland and his reel as well as real partner Zendaya give another show of sweet PDA at their friend's wedding. 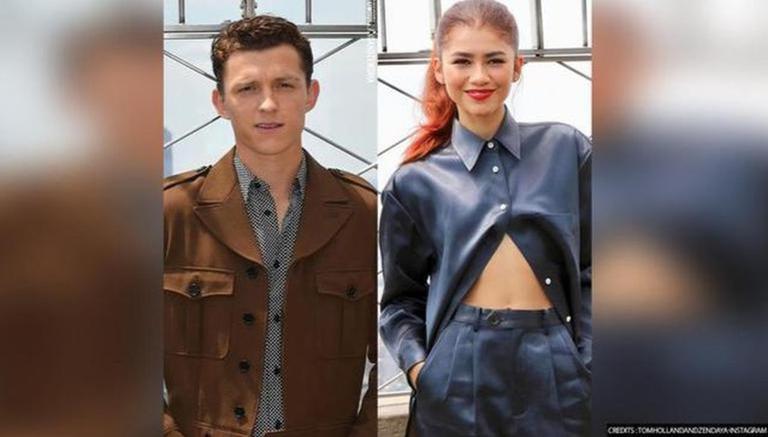 
The film industry is buzzing with anticipation after the trailer of Marvel's third instalment of the Spider-Man franchise titled Spider-Man No Way Home dropped online. While the Spider-Man trailer holds promises of multiverse shenanigans and a trip through various timelines, lead actors Tom Holland and Zendaya are giving the fans another reason to watch the movie. After being spotted packing on PDA in their car, the duo was captured attending their friend's wedding together in Oakland and the fans cannot keep calm about it.

Tom Holland and Zendaya hold hands at a friend's wedding

The 25-year-old British actor attended a friend's wedding with his rumoured girlfriend and Spider-Man No Way Home co-star Zendaya. The pictures and videos from the ceremony took no time to surface on the internet and catch netizens' eye. In the pictures, the 24-year-old American actor donned a full-length brown dress while Holland opted for a classic black suit. The duo was seen watching and cheering for the bride the groom dance and were also spotted holding hands at one point.

Fan pages dedicated to the couple started flooding feeds with images and videos of the couple. Although the duo has neither denied nor confirmed their relationship, a video of Holland looking at Zendaya during a romantic song served as proof for the fans to believe that they have officially started dating.

While we are all waiting for the Spider-Man no way home trailer to come out Tom Holland and zendaya having fun at a wedding in LA😭🥺❤️ pic.twitter.com/ySCU6qW8dm

Tom Holland and Zendaya at a wedding?! 😭 my heart cannot handle this.
I’m embarrassed for the people who thought they were a Pr stunt pic.twitter.com/Jl1CgAj58c

My babies 🥰🥺 I hope they’re dating, they are made for each other.

And I love that Zendaya is the one auntie on the wedding who records everything 😂#tomholland #Zendaya pic.twitter.com/8xCLsgnhdS

Tom Holland and Zendaya at a wedding is one of the cutest things I’ve ever seen pic.twitter.com/ck1GH3vQss

In another picture, Holland can be seen resting his head on Zendaya's head as they intently watch the performances on the dance floor. They were also seen cheering on the bride dancing with her father.

READ | 'Spider-Man: No Way Home' trailer leaked! Sony, Marvel scurry to take it off of internet

More on Tom Holland and Zendaya

Ever since sharing the screen on Spider-Man: Homecoming in 2017, rumours about the duo dating started swirling around the fandom. With little to no success in procuring evidence of their romance, the fans were treated with pictures and videos of Holland and Zendaya packing on PDA in their car in July this year.

On the work front, Holland will be seen playing the titular role in Spider-Man No Way Home while Zendaya will essay the role of Michelle "MJ" Jones. The Spider-Man trailer was released on August 24 and the movie is scheduled to be released in theatres on December 17, 2021.

READ | 'Spider-Man: No Way Home' trailer breakdown: What to expect as it reintroduces old baddies