Demi Moore and Bruce Willis' daughter, actor Tallulah Willis got engaged to film director Dillon Buss. Taking to her Instagram handle on Tuesday, Tallulah announced the engagement upon sharing a string of photos of Dillon's proposal to her. Demi Moore and Bruce Willis were married from 1987 to 2000 and they share three daughters Rumer, 32, and Scout, 29, and Tallulah being the youngest of them aged 27.

Tallulah shared a string of images on May 4 which showed how she responded to Dillon Buss' proposal. With the camera hidden afar in their backyard, Dillon was seen getting down on one knee with the ring, and Tallulah was seen getting overwhelmed by the surprise. One by one the images showed how happy she was with the proposal and went on to kiss him. Tallulah wrote in the caption "with absolute most certainty". Tallulah later also added a close-up video of her massive emerald-cut engagement ring and wrote in the caption "HANDS STILL SHAKIN’ — MOMS SPAGHETTI — I’m FIANCÉNCHED."

The Willis family could not be more excited to have a new addition to their family. Tallulah's sister Scout Willis was overwhelmed by her younger sister embarking on a new journey and she wrote in comments of engagement post "weeping, I am so excited" with several crying and ring emoticons. Bruce Willis' second wife Emma Heming was also happy about the engagement and dropped several red hearts emoticons in comments. 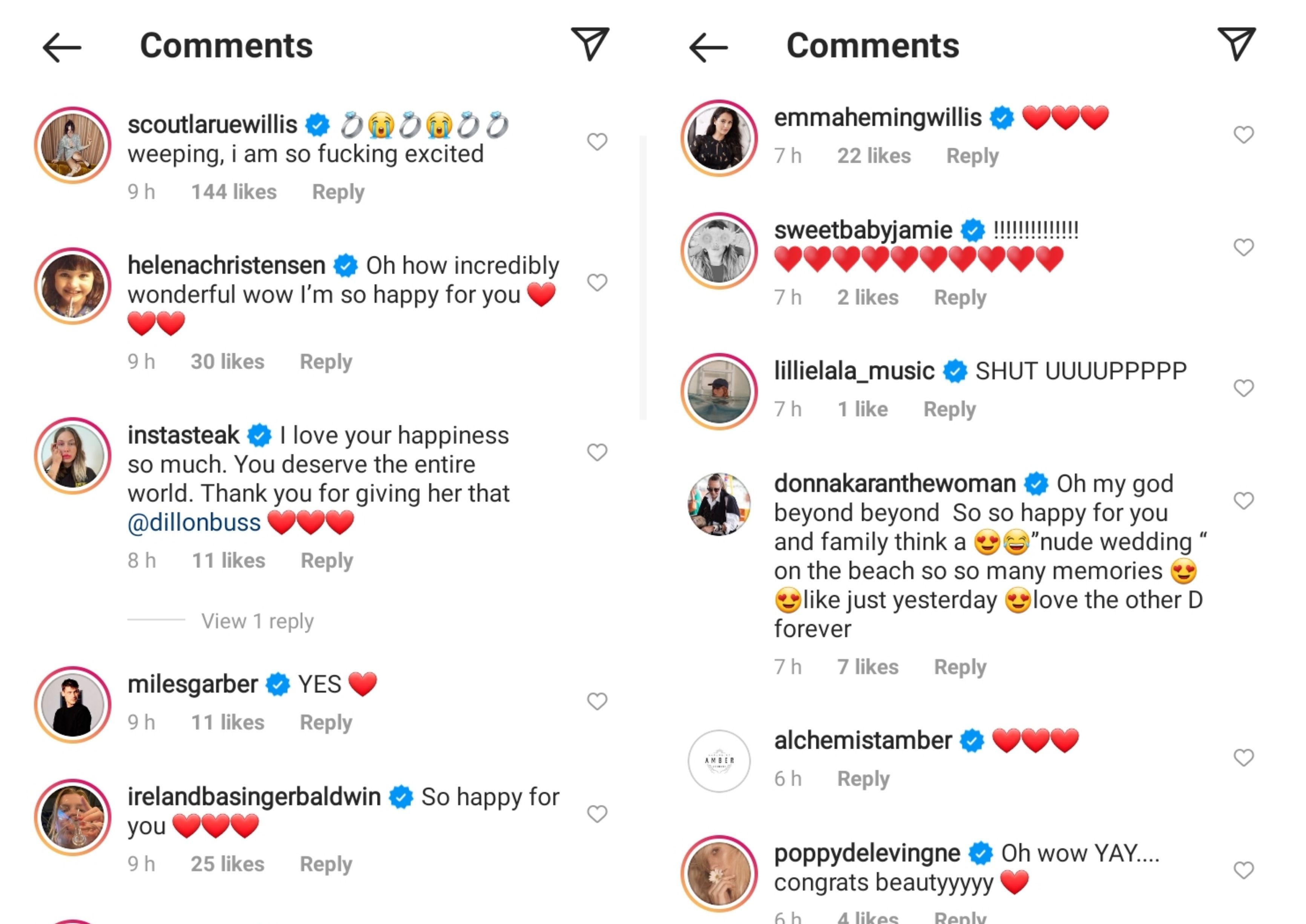 Rumer Willis actually went on to post their photos on her Instagram to congratulate the couple and she added a picture of all three sisters together. She wrote in the caption "I love these crazy kids. Congratulations @dillonbuss and @buuski I love you both so immensely and I am so excited for you." She shared their photos in her stories and wrote "My baby sis is enfianced woohoo" and tagged Dillon Buss saying "so stoked to have you as a brother".

READ | 'Red 2' cast: Here is a list of the characters from Bruce Willis starrer film

Dillion Buss also shared a series of photos celebrating their engagement. In the first picture, Tallulah was seen embracing him with her hand on his cheek showing off the ring and their dog also featured in the photo. Buss also added pictures of Tallulah holding a bouquet while flaunting the ring and also her surprised reaction later. Buss wrote in the caption "I can finally call you my fiancé. Love you forever Buuski Lu, you are my best friend" and referring to their Star Wars day engagement date he added "#maythefourthbewithus".

READ | 'Midnight in the Switchgrass' release date: Know all about Bruce Willis and Megan Fox film