As the fans await the release of the highly-anticipated movie, 'Thor: Love and Thunder', Christian Bale's look from the film recently got leaked. See pics here. 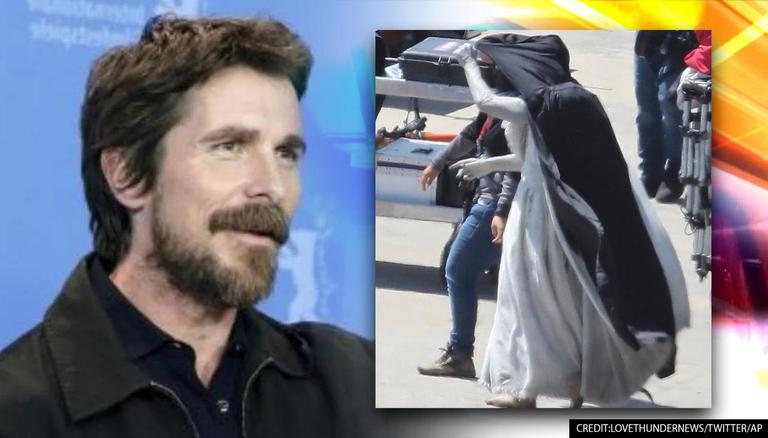 
The fans of Thor: Love and Thunder, one of the much-awaited American superhero movies, recently witnessed a major spoiler from the film when the look of one of the characters was leaked online. As the shooting for the movie was earlier delayed due to the COVID-19 pandemic, it was recently resumed with the lead actors, Chris Hemsworth, Tessa Thompson, Natalie Portman, Christian Bale, Chris Pratt and others.

A series of pictures from the sets of Thor: Love and Thunder recently surfaced on the internet in which one of the lead actors, Christian Bale can be seen donned in the unseen costume of his character, Gorr, The God Butcher. In the pictures, he can be seen identical to what the comics depicted as his character. He was spotted wearing a sleeveless white robe which was waving with the wind as he walked towards the set.

The first look at Christian Bale as Gorr the God Butcher in Thor: Love and Thunder!

Filming has resumed in Malibu

Many of the fans were delighted to see his new look while many others had a lot of other speculations about his role. Many of them also took a jibe at his new look and began comparing it with other characters. Some of them also stated how they did not like Christian Bale’s appearance in the film while others expect it to be one hell of a movie. Take a look at some of the fans reactions to the leaked pictures of Christian Bale’s look.

He looks like a ghost. Perhaps all those light-colored clothes must facilitate the production of CGI all around his features.

This is going to be one hell of a movie! The cast , crew and director are all top shelf which leads me to believe this one will be a winner all around. Its nice to have something to look forward too.

I wonder if, once he put on that outfit and makeup, he was like, “I’ve made a huge mistake”. pic.twitter.com/glJ0pyCS5x

I think it looks dope now🤷‍♂️

I thought they were done filming. Chris hemsworth announced it in instagram

Fans have been speculating about how the makers were filming for the movie when the lead actor, Chris Hemsworth made an announcement about the wrap. The actor took to his Instagram handle a couple of weeks ago and shared a picture of himself alongside actor Taika Waiti in which they both can be seen sporting their character’s costume. In the caption, he revealed how they had finally wrapped up the shooting of their film and further thanked his cast and crew who helped him make this a great journey. He wrote, “That’s a wrap on Thor Love and Thunder, it’s also national don’t flex day so I thought this super relaxed photo was appropriate. The film is gonna be batshit crazy off the wall funny and might also pull a heart string or two. Lots of love, lots of thunder! Thank you to all the cast and crew who made this another incredible Marvel journey. Buckle in, get ready and see ya in cinemas!! @taikawaititi @marvelstudios  @jasinboland.".

READ | James Gunn reveals he has read the script of 'Thor: Love And Thunder' and it's 'great'
READ | Matt Damon says "everybody knows" that he'll be back in 'Thor: Love and Thunder'