Was Kanye West The Mystery Man With Kim Kardashian At Met Gala 2021?

Was Kanye West the mystery man with Kim Kardashian at Met Gala? Many netizens believed so. Here's the truth of the out-of-the-box appearance. 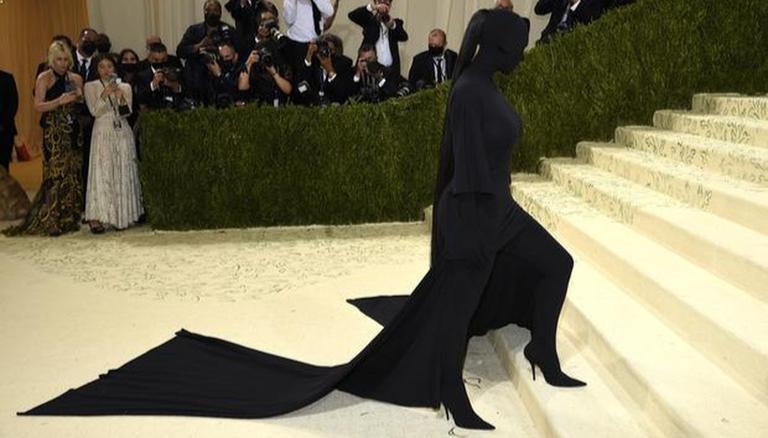 
After their 'remarriage' in a mysterious listening event for Donda, did estranged couple Kim Kardashian and Kanye West reunite once again at the Met Gala? Several netizens felt that the duo appeared together at the New York fashion event on Monday. Right from expressing their surprise to guessing the 'best way for exes to meet', there were different kinds of reactions.

When you don't want to be seen with your ex 🤨@KimKardashian @metmuseum #KimKardashian #MetGala #MetGala2021 #MetInAmerica pic.twitter.com/e9hDt45mdz

@kanyewest and @KimKardashian arrive at the 2021 #MetGala
pic.twitter.com/qIIUHex2x3

So was it Kanye West who made a mysterious appearance alongside Kim Kardashian? As per reports, the answer is no.

Truth behind mystery man with Kim Kardashian at Met Gala 2021

Media persons did not find it hard to find out that the woman in an all-black Balenciaga attire from head to toe was Kim Kardashian. They could do despite only a ponytail emerging from the bodysuit, while even her hands and face were all covered in black.

READ | Kim Sharma, Leander Paes are twinning in outfits as they step out for a romantic date

The look was similar to that of Kanye West at an event for Donda  where he had also covered with face with a mask during his performance. Kim too had been seen in a similar look at the Donda event.

As per reports in international media, the person who had accompanied her in the snap was Balenciaga creative director Demna Gvasalia. Though Kanye did not appear along with her, as per a report on TMZ, it was Kanye who had convinced her to go for the out-of-the-box look.

The look sparked a meme fest on social media. Right from quipping that she had 'landed at a funeral' or stating that the look was inspired from Dementor from Harry Potter, there were all kinds of reactions.

Kim and Kanye, who had been one of the popular couples in the world, have decided to get divorced after a seven-year marriage. In recent weeks, however, news of their reconciliation has been doing the rounds. It all started with Kim attending the listening event for Donda and appearing in a bride-like look after Kanye emerged from the fire.

After the album, Kim accidentally gave a shoutout to the album 'without even listening' to it, as netizens poked fun at her, since her volume was kept lowest in the screenshots. She later corrected it.

WE RECOMMEND
Ahead of Met Gala 2021, Kim Kardashian West turns heads with all-leather outfit
Kim Kardashian reacts after her 5-year-old son Saint broke his arm; Says She is 'Not okay'
Kim Kardashian excited for Ben Affleck-Jennifer Lopez's future, says 'Long Live Bennifer'
Kim Kardashian & Kanye West 'friendly' but NOT getting back together? Here's what we know
Kanye West gets his 10th No.1 album as 'Donda' soars to the top on Billboard 200