Zendaya Says She Wanted Boyfriend Tom Holland In 'Euphoria' S2: 'Just Sneak Him In A Shot' 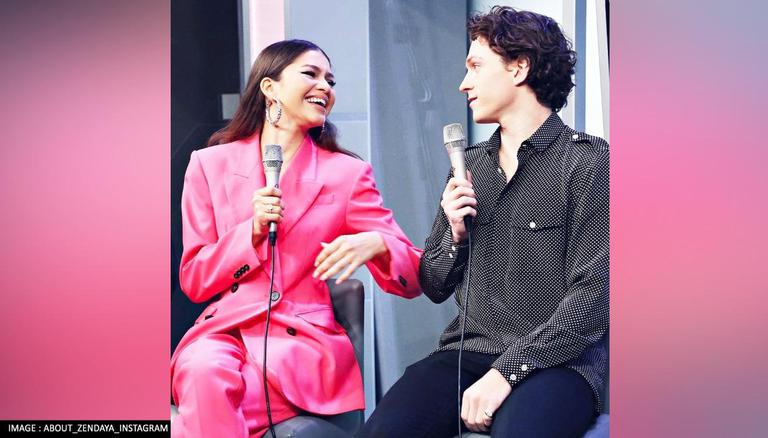 
Tom Holland and Zendaya have created a buzz in the town. Ever since they made their relationship official, the duo never shies away from expressing their love for each other. Fans love their on-screen and off-screen chemistry and the two are often seen supporting each other on the work front. Recently in an interview, the Shake It Up actress said that she has been attempting to persuade the makers of her TV show Euphoria to rope in Tom Holland in a cameo role.

In an interview with E! News Daily Pop on Friday, Zendaya said that she has suggested Tom as a background character or Easter egg. She said, “I mean, listen, we’ve talked about it all the time. We’re like, ‘Let's just sneak him in the back of a shot or something!’”

Many were doubtful since Euphoria is a lot hazier in tone than the MCU films for which Tom is popular and they are uncertain if he could fit in. However, Zendaya is not one of them. In the same interview, she responded, “He did Cherry, so he’s definitely not a stranger to (darker roles).”

Cherry is a crime drama film in which Tom plays the character of a war veteran dealing with PTSD.

Tom Holland wants to reunite with his Spider-Man: No Way Home co-star Zendaya

In December, while promoting Spider-Man: No Way Home, Tom expressed his desire to work in Euphoria season 2. In a video interaction with IMDb, he told Zendaya, “I want to be in Euphoria,” and she responded, “OK! Let me talk to some people. HBO…let’s get them on the phone.”He expresses his excitement to work with Zendaya and further reveals “I have been petitioning for this for a long time and it has not happened yet and I’m very disappointed".

Zendaya-starer teen drama is making a comeback with its second instalment The second season of the cult-favourite high school drama will have eight episodes and it is all set to premiere from 9th January 2022. Recently, the trailer of Euphoria season 2 created a lot of buzz on social media and since then fans have been waiting for it. The trailer gives us a sneak-peek into how the central characters of the web series are dealing with love, heartbreak and addiction. The series received a good response from the audience and  Zendaya, who plays protagonist Rue, became the youngest person to win an Emmy Award for Best Actress for her show Euphoria.