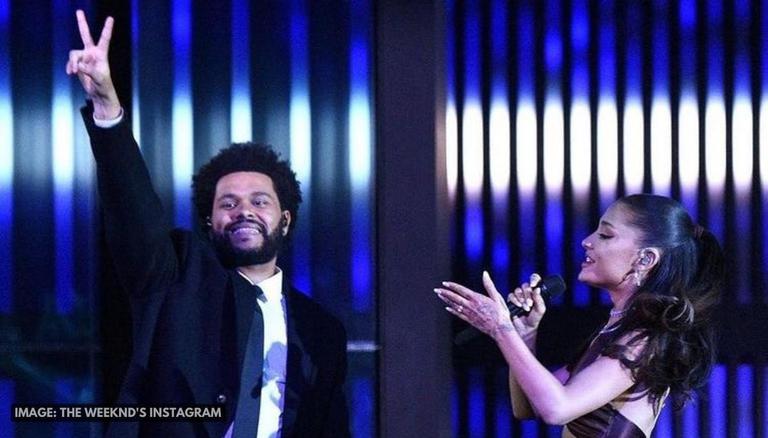 
Ariana Grande and The Weeknd teamed up to kick off the iHeartRadio Music Awards 2021 on Thursday night at the Dolby Theatre in Los Angeles. While The Weeknd performed live at the Billboard Music Awards 2021 last, it marked Ariana's first-ever live performance and awards night appearance post-marriage with beau Dalton Gomez. The singer-duo took the stage of 2021 iHeartRadio Music Awards to perform their newest collaborative song, Save Your Tears (Remix), and ardent fans of both the pop sensations couldn't stop gushing about their performance on social media.

Hosted by Usher, the 2021 iHeartRadio Music Awards was held on May 27, 2021, at Los Angeles' Dolby Theatre and was broadcast live on Fox. Among the many star-studded performances of the night was The Weeknd and Ariana Grande's live rendition of the former's After Hours remix song, Save Your Tears. Their performance of the newly-released melody was nothing less than "killer" for fans, especially because the duo performed it together in front of a live audience for the first time.

For their performance, Ariana Grande and The Weeknd twinned in black outfits. The Positions hitmaker looked stunning in a black satin co-ord set with cut-out details, paired with opulent diamond jewellery and a half-ponytail hairdo. On the other hand, the Starboy crooner donned an oversized black coat over a white shirt with black pants and rounded it off with a black tie and black shoes.

READ | Billboard Music Awards 2021: The Weeknd grabs the title of 'Top Artist' at the ceremony

Check out Ariana Grande & The Weeknd's 'Save Your Tears' live performance below:

Soon after their performance aired live on Fox and did the rounds on social media, it was quick to win netizens' hearts as much as it did of the audience that lauded and cheered for the pop artists during their live performance at the Dolby Theatre. Not only did their performance video go viral on the internet, but fans also lavished both the artists with heaps of praise over their highly melodic performance on Twitter. While one user took to the micro-blogging platform and wrote, "Do you guys know who's the most iconic duo? The Weeknd and Ariana Grande, always #iHeartAwards2021", another tweeted, "love it or hate it, Ariana Grande and The Weeknd sing perfectly together #iHeartAwards2021".

Check out some more reactions by Twitterati below:

the way the weeknd stopped to listen to ariana’s high note im in LOVE 😭 pic.twitter.com/wrxQONxNPV

They look so great together, btw it was emotional day for me😭, it's her first performance after pandemic@ArianaGrande ilysm @theweeknd and ty for the fabulous performance pic.twitter.com/0nboiANOD1

The Weeknd & Ariana Grande perform "Save Your Tears" together for the first time ever live at the #iHeartAwards2021.

Notice how NO ONE had their phone up throughout the performance! pic.twitter.com/Ja1NrG1dJR

how it started // how it's going @ArianaGrande @theweeknd #iHeartAwards2021 pic.twitter.com/cslPmPLeul

Ariana Grande and The Weeknd just killed it with the live TV debut of the “Save Your Tears” remix at tonight’s #iHeartAwards2021!

The Weeknd & Ariana Grande open the #iHeartAwards2021 with a killer performance of “Save Your Tears”. pic.twitter.com/0CRLmmXyVy