Armaan Malik Reveals He Was COVID Positive; Says 'Happy To Be On The Other Side'

Armaan Malik informed his fans that he was COVID positive despite observing all the precautions. The singer said that he was happy to have completely recovered.

Armaan Malik, via an Instagram post on March 24, 2021, informed all of his fans and followers that he had been COVID positive but has completely recovered now. He shared a couple of pictures alongside his post where he can be seen sitting as he took the two pictures. Armaan Malik is wearing a light blue shirt with a pair of beige pants in the pictures that he has shared. The singer looks quite tired in the two pictures he has shared and his followers have said so as well when they expressed their concern for Malik.

As part of the caption for his post, Armaan Malik wrote that everyone would always tell him that he was over-cautious and so he never thought he would be infected by the virus. He continued by saying that the virus had unexpectedly found a way into him and had made him sick. He called the virus a ‘tiny little monster’ that managed to reach everyone one way or another.

He then said that he was happy to have overcome the disease and emerged well on the other side. He ended his post by thanking all the people who had stood by him and supported him at the time when he was sick and he said it was those people who had gotten through the weeks when he was sick. Following the news of Armaan Malik’s COVID test turning negative, the singer's followers took to the comments to express their concern for the singer and tell him that they were there for him. 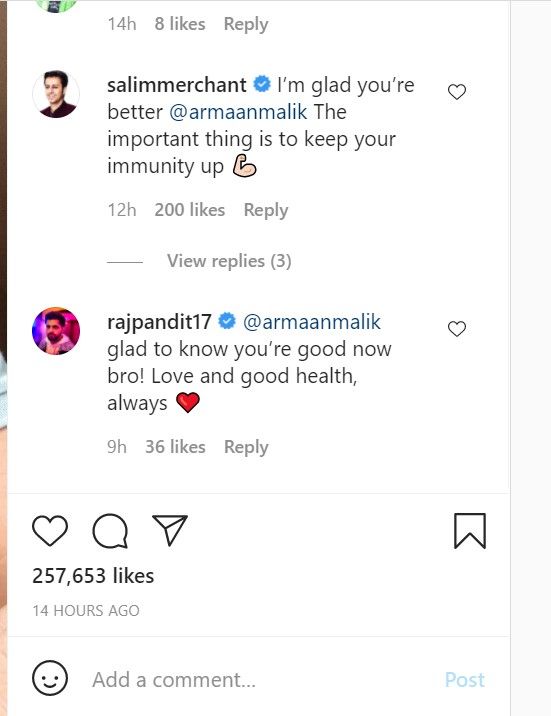 Many of his fans asked him how he was feeling now and if he was getting enough rest. Others asked him to take care and take it easy for the next few days until he felt strong again. Some even said that he did not look well in the pictures that he had shared and that he seemed to have lost health. Armaan Malik’s friends from the industry also took the opportunity to wish him well. Salim Merchant commented by saying that he was happy Malik was better and advised him to try and keep his immunity up now. The post has received 3,454 comments and 261k likes and still counting.