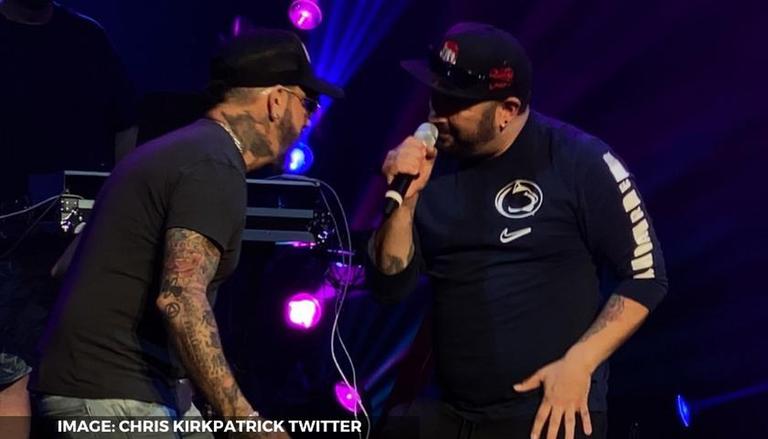 
Backstreet Boys and NSYNC are two of the most popular bands in the world. With several hit tracks to their credit, the bands still enjoy a massive fandom all over the world. Recently the fans of these popular bands from the 1990s were in for a big surprise as the Backstreet Boys member AJ McLean and NSYNC member Chris Kirkpatrick debuted their new collaborative single titled Air in Las Vegas. It is a peppy dance track from the singers’ sideband ATCK (All The Cool Kids).

The band ATCK (All The Cool Kids) was formed by the Backstreet Boy member AJ McLean and Brandon Mashburn AKA DJ Lux. The band also features a revolving door of musicians like Kirkpatrick. The 90s icons AJ McLean and Chris Kirkpatrick debuted their new collaborative single Air in Las Vegas on Saturday. The surprise performance happened at the Music for Life fundraiser for the Victoria’s Voice Foundation. The crowd cheered for the duo as they collaborated on their new single.

During the event, headliners AJ McLean and Chris Kirkpatrick also jokingly debated about how their band is superior to the other. Adding to the fans' delight they also went on to perform their hit songs like one of the popular Backstreet Boys' songs I Want It That Way and NSYNC’s Bye Bye Bye. Later on, host Jeff Timmons also took the stage and weighed in with a remixed version of his band 98 Degrees song The Hardest Thing.

The trio then sat down for an interview with Variety during which 98 Degrees Jeff Timmons joked that they will be announcing a 98 Degrees/Backstreet/*NSYNC World Stadium Tour. The musicians also shared some interesting trivia about the Backstreet Boys and NSYNC rivalry back in the day. Chris Kirkpatrick went on to say that he could not stand AJ McLean during that time and he could not be in the same room with him.

However there was always mutual respect and now it is cool to see what each other’s bands have done and how it all worked out, added the musician. Chris Kirkpatrick also mentioned that it was this symbiotic relationship with Backstreet Boys, 98 degrees, NSYNC and even O-Town and other bands that came in. AJ McLean also went on to say that he, Chris Kirkpatrick and Jeff Timmons have become close since then.