South Korean actor Jung Ho Yeon seems to be enjoying some leisure time as she recently attended Billie Eilish and her brother Finneas' London concert. The Squid Game star, who became a household name with her character Kang Sae-byeok, shared a story from the concert and tagged Billie, who was quick to respond to it. Expressing her disbelief at seeing Jung attend her show, Billie wrote 'OMG' as she reposted the former's story.

Taking to her Instagram stories, Jung Ho Yeon dropped a picture of the Ocean Eyes hitmaker as she performed in the midst of thousands of fans. In the subsequent post, Jung shared a still of Billie's brother and music producer Finneas, where he can be seen playing the keyboard while Billie's picture appeared on the big screen behind. Expressing her happiness, Eilish wrote 'OMG'. Their fun interaction continued as the actor reposted her reaction and wrote," OMG x 100000000." Take a look. 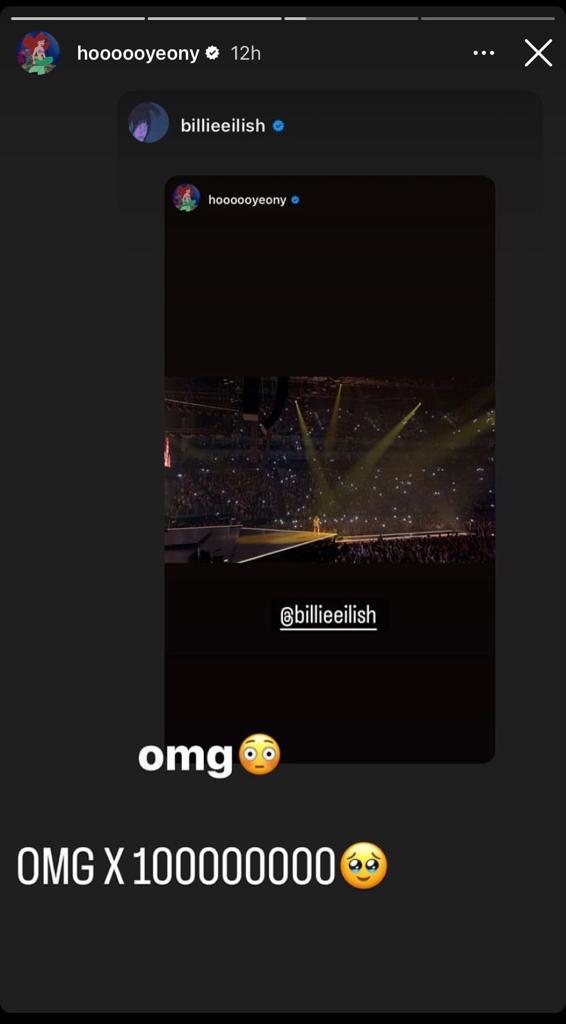 For the uninitiated, Jung took on the role of a North Korean refugee in the hit Netflix series Squid Game, with her character Kang Sae-byeok participating in the deadly game of survival to bring her parents to South Korea and buy a house for her family to live in. Written and directed by Hwang Dong-hyuk, Squid Game also starred  Lee Jung-jae, Park Hae-soo, Wi Ha-joon and O Yeong-su among others in pivotal roles.

Netflix recently announced the show's second instalment with a gripping teaser showcasing the Red Light-green Light Doll, with eerie music playing in the backdrop. Squid Game director also shared a message in which he told that the forthcoming season will see the return of Gi-hun and the mysterious Front Man.

The message read, "It took 12 years to bring the first season of ‘Squid Game’ to life last year. But it took 12 days for ‘Squid Game’ to become the most popular Netflix series ever." Hwang continued, “As the writer, director, and producer of ‘Squid Game,’ a huge shout out to fans around the world. Thank you for watching and loving our show... Join us once more for a whole new round."

Squid Game is officially coming back for Season 2! pic.twitter.com/4usO2Zld39