Beyoncé's daughter Blue Ivy attended the NBA finals with her father Jay Z where she became the center of attraction for looking just like her mother. 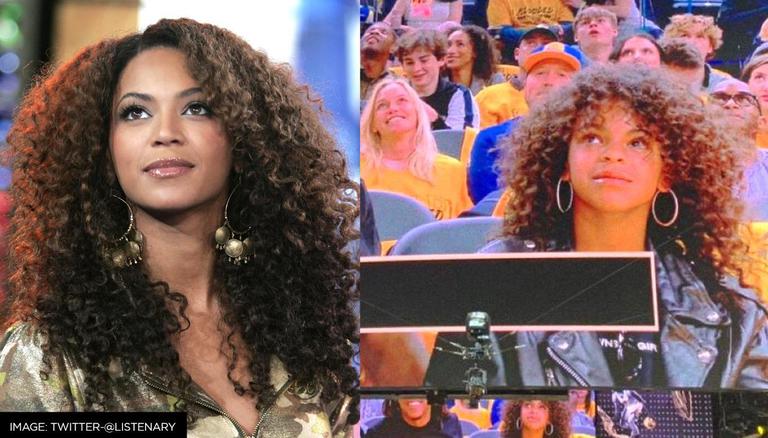 
American singer Beyoncé and rapper Jay-Z's daughter Blue Ivy Carter recently attended the NBA finals with her father. The youngling quickly became the centre of attention at the event due to the uncanny resemblance to her mother.

Beyoncé and Jay-Z tied the knot in 2008 and have three children together. Blue Ivy Carter was born in 2012. The couple's twins Rumi Carter and Sir Carter were born in 2017.

Pictures and videos from the NBA finals made the rounds on the internet where Blue Ivy was photographed with her father Jay-Z. The 10-year-old is known to have rare public appearances and has stayed out of the limelight over the years despite enjoying popularity earlier. The 40-year-old singer's daughter rocked a new curly-haired do and a black jacket.

Many were reminded of Beyoncé's iconic curly hairstyle from her performances and believed that she looked exactly the same. Additionally, a particular video from the stadium showed Blue Ivy looking around and smiling to herself. Many reacted to the video by comparing her mannerisms to the Single Ladies singer.

A user shared the video with the caption, ''This isn’t Beyoncé?'' Another user tweeted, ''Idkkk all I see is Beyoncé I mean even the facial expressions and attitude is clouding anything she may have of Jay (sic)''. A few also brought up videos of the singer to compare Blue Ivy's mannerisms and expressions in the recent video.

READ | Oscars 2022: Beyonce to perform her Academy Award-nominated track 'Be Alive' at the event

How old are we? 😅😅😅 time flies, look at Blue Ivy pic.twitter.com/VzICuK2Hqt

Many also complimented her style as one netizen tweeted, ''When I saw this I gasped she looks so much like her mother it’s actually scary (sic)''. On the other hand, a fan pulled out a picture of Beyoncé when she was young to by writing, ''Blue Ivy looks just like her Mama''. Check out more reactions from netizens below.

In another video, Jay-Z is seen putting his hands around Blue Ivy while the latter appeared to have been a little embarrassed by her father's affection. She is also seen whispering, ''Dad, my hair'' as the rapper tugs her closer. The video has garnered comical reactions as netizens adored the hilarious interaction between the father and daughter duo.