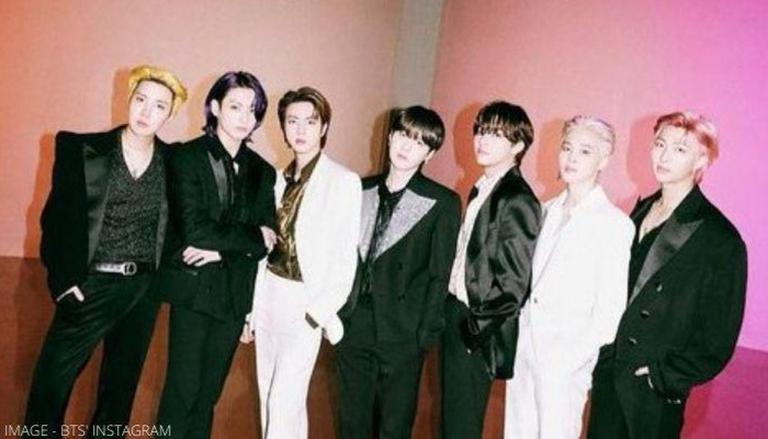 
Muster Sowoozoo is celebrated every year by the South Korean band BTS on their anniversary with a two-day event consisting of several fan events, games, and concerts. The first day of the two-day event took place on Sunday, June 13, with the band members coming together to perform their hit tracks. It came as a surprise to the fans when the septet decided to sing Suga's Daechwita and along with that, also sported fake beards and traditional outfits.

BTS' boy band members surprised their fans, aka the BTS ARMY, when they decided to sing Suga's song Daechwita during the first day of their Muster Sowoozoo 2021. The singers not only crooned to the track, but they also got their fans excited with their look for the performance. While Jin sported a fake beard for Daechwita, Taehyung impressed fans with his rapping skills. Suga was also seen performing with a sword, which he did in the original music video of the track as well.

Fans and followers of the South Korean boy band took to their social media handles and expressed their excitement about BTS members performing on Daechwita. While some claimed that Suga's character from Daechwita had been successfully resurrected, others added that they just couldn't get over the rap by Taehyung. Here is how the BTS ARMY reacted to BTS' Daechwita performance.

Kim Taehyung living his ultimate dream!
Being a rapper and having facial hair 🤭😍💜#MUSTERSOWOOZOO#KimTaehyungpic.twitter.com/g6Ja5S66Uw

taehyung making sure the only fancam in existence of his daechwita performance is one where he's wearing ridiculous fake facial hair is such a power move pic.twitter.com/bxUN5Qkz1a

Agust D will be so proud of OT7

I can't stop myself from thinking about Hobi's verse from #DAECHWITA
Hobi 's verse in Dis-ease & Daechwita is flashing though my mind every now & then.

And when Yoongi & Hobi began vibin to Who's the King #MUSTERSOWOOZOOpic.twitter.com/hhFycOqFuJ

BTS 2021 Muster Sowoozoo is a two-day event that will be held from June 13-14. On both days of the concert, the performances will start streaming at 6:30 pm KST. The concert will be replayed or streamed once again for anybody who has missed it, on June 19 and June 20 at 10:00 am KST. The ARMY can watch the concert live on the popular streaming platform named Venew Live. The set-list for BTS 2021 Muster Sowoozoo featured Life Goes On, Butter, Dynamite, Moving On, Stay, Fly to My Room, Daechwita, IDOL, Dis-ease, Fire, So What, Not Today, Wishing on a Star, A Supplementary Story: You Never Walk Alone and Mikrokosmos.