Namjoon's rap has always been the talk of the town. and now, the BTS member has grabbed the attention of netizens for his easy-breezy style. 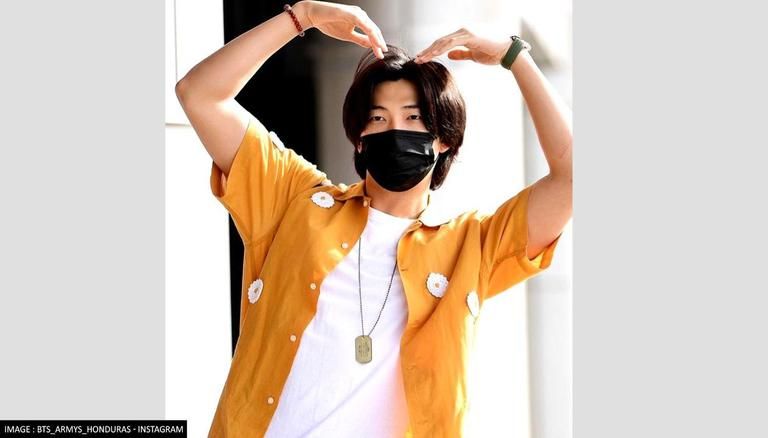 
BTS leader RM whose real name is Kim Namjoon recently joined hands with award-winning Korean musical collective, Balming Tiger for their single, SEXY NUKIM. Songwriter and rapper, RM has made many appearances in various events, exhibitions, and more in recent times. Namjoon's rap and appearance in music videos have always been the talk of the town. and now, the BTS member has grabbed the attention of netizens for his easy-breezy style and appearance at the Gimpo airport.

BTS' RM makes a breezy appearance at the airport, looks attractive in a new hairstyle

Kim Namjoon aka RM was snapped at the Gimpo airport in an orange shirt with a flower design on a white tee. He paired the attire with dark denim and yellow sneakers and a trendy satchel handbag. Meanwhile, as per Bollywood Life, he left for Japan for the final round of &Audition - The Howling. RM looked stylish in the attire and his silky, smooth hair grabbed the attention of the ARMY. His hairstyle prompted several tweets online, as people were seen going gaga over his hair.

idk i want him or his hair 🥺 huhu namjoon pic.twitter.com/WJZ0iS4RyS

Meanwhile, Kim's new music video SEXY NUKIM with Balming Tiger is made up of nearly a dozen different creatives including musicians, producers, directors, visual artists, and writers who are working together since 2018 to represent the younger generation and popularize Asian culture on a global level.

The new single SEXY NUKIM along with RM is Balming Tiger's first in a year-and-a-half. For the new song, Balming Tiger brought rappers Omega Sapien, genre-hopping MC and songwriter Mudd the student, and rising producer-rapper Bj wnjn who was the main producer behind the single. The latest release also marks RM's first collaboration with Balming Tiger.