BTS 'Permission To Dance On Stage': From Dance-breaks To Jin's Bow, Here Are TOP Moments

At the ‘BTS Permission To Dance On Stage', the boys performed a total of 24 songs ranging from their 2016 hits such as 'Save Me' to their recent banger 'Butter' 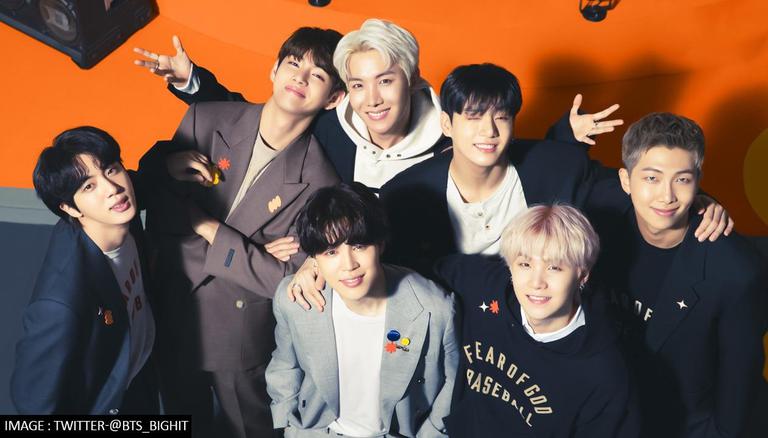 
BTS on Sunday made a powerful comeback with the ‘BTS Permission To Dance On Stage' concert, their first global online gig after almost a year. From their choreography to their swanky outfits and their fresh renditions of popular numbers such as 'I Need You', 'Dynamite' and 'Butter', the Bangtan Boys left ARMY's around the world, virtually starstruck.

At the ‘BTS Permission To Dance On Stage', the Bangtan Boys performed a total of 24 songs ranging from their 2016 hits such as- 'Save Me' to their recent bangers 'Butter' and 'Permission to Dance'. BTS member V aka Taehyung could not perform the choreography of several songs due to his calf injury. V was seen sitting on a couch as the band performed their power-packed numbers- 'Fire' & 'Idol' and others.

Here are some of the top moments from the concert

A song that ARMYs never tired of listening is BTS' first English single 'Dynamite'. Released by the band in August 2020, the song has been performed on multiple stages from the MTV Video Music Awards 2020 (VMAs) to the Billboard Music Awards 2020. However, the latest rendition of their hit single saw an addition of a new dance break which was performed by the 6 members (with V cheering from the sidelines).

READ | BTS' V injured during 'Permission to Dance on Stage' rehearsal, to perform while seated

At the end of the concert, BTS fondly paid homage to their fans by lining up ARMY Bombs, their fandom glowsticks across the concert hall. The ARMY bombs lined up across the room represented the virtual fans who had tuned in to watch the septet and could not attend the concert in person due to COVID-19 restrictions. BTS promised that they will wait to meet their fans in person like the lyrics of 'Spring Day.'

READ | What happened to BTS' V? Will he perform at 'Permission to Dance on Stage' concert?

These lucky army bombs got to witness BTS' live performances for the nth time. Thanks for representing the ARMY! 🥺💜✨ #PTD_ON_STAGE pic.twitter.com/Ql26KFWCiI

BTS leaves space for V during the performance

Those well-versed with BTS, know how complicated and carefully planned each of their choreography is. In the absence of Taehyung, who could not perform with the group during their dance numbers, the band was seen leaving space for V as a mark of their love and respect. None of the choreographies were modified in his absence.

READ | BTS Permission To Dance On Stage: From songs performed, to V's injury, all highlights here

Speaking to the ARMYs about his injury, V said, "It was our first try. We wanted to showcase it all. You won't be missing any 7 of us. I was fine yesterday, but I suddenly developed pain (my legs). I'm not mad. (I have) Iron legs!...." He added, "Next time around, I'll take care of myself, I'll get better soon, and so that I can do better in the rest of the tour."

READ | BTS 'Permission To Dance On Stage': Full list of songs performed by the K-pop band

Don be embarassed with you sitting on the other side of the stage taetae, u didn't know how much ruckus you've caused just by simply sitting there, you did well and we are so proud of you for enduring this whole time 💜

BTS highlights their moment of pride at the UNGA

The boys also played a short clip from their address at the UN General Assembly last month. The frontrunners of the international K-pop boom had accompanied by South Korean President Moon Jae-in as special presidential envoys for future generations and culture. The band addressed as well as delivered a performance at the online Sustainable Development Goals (SDG) Moment 2021.

BTS Jin sports a green bow in his hair

BTS Jin who often becomes the talk of the group's concerts due to his out-of-the-box antics was seen sporting a big green bow in his hair during the 'Permission to Dance' concert. Shortly after he came on stage with his new adorable hairstyle, ARMY's began to trend the look on social media.