South Korean music sensation PSY is now all set to make his comeback with his 9th album and has collaborated with BTS' Suga for the album's first song. 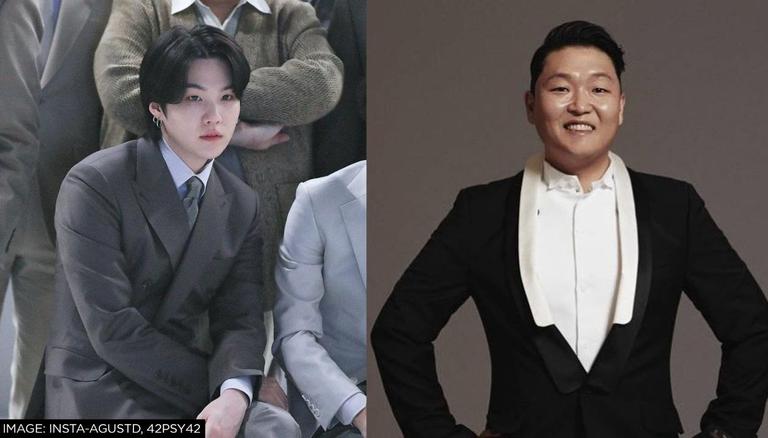 
K-pop has surely taken the world by storm with the increasing popularity of several solo musicians and bands. South Korean singer PSY and boy band BTS are two of the most popular K-pop stars in the world, who also have several records in their names. While BTS recently bagged their second Grammy nomination and has been releasing chartbusters for the past few years, PSY was on a break since 2017. The South Korean music sensation is now all set to make his comeback with his 9th album and has collaborated with BTS' Suga for its first song.

Taking to his official Instagram handle, BTS member Suga recently dropped the teaser of the upcoming song That That from PSY's much-awaited album PSY 9th. The 29-year-old rapper shared the official poster of the song, which featured an animated avatar of Psy, donning a cowboy outfit. With the poster, Suga revealed he turned producer for the upcoming song. The rapper also shared the official teaser of That That in which PSY could be seen running toward the camera in a white and brown ensemble. In the end, he takes a leap and falls to the ground. Sharing the teaser, Suga mentioned the track That That is the title song of the upcoming album PSY 9th. The song will be released on April 29, 2022.

Fans react to That That song

Fans of BTS' Suga and PSY are seemingly on cloud 9 after hearing about their collaboration. The microblogging site Twitter is filled with their reactions. Here is how fans were amazed to see Suga and PSY collaborate.

🏜 • Two legends in K-Pop are finally together!

SUGA is the producer for the legendary K-POP artist's PSY newest single - THAT THAT!

That That will be released on Friday at 4AM!

Two legends in K- Pop are together!
Our Prod. SUGA of @BTS_twt and @psy_oppa 😍
Can't WAIT TO SEE.

PSY is a South Korean singing sensation, who rose to international fame with his viral song Gangnam Style. The song became an overnight hit because of its foot-tapping beats and iconic dance. It is one of the most viewed videos on YouTube with over 4.3 billion views. PSY's last album titled PSY 8th 4X2 = 8 was released in 2017. Earlier this month, the singer announced his comeback with his 9th album. The singer also confirmed there will be a track like Gangnam Style in his new album. In a Twitter video, he said, "To be honest, I produced ‘Champion’ in 2002, and it took me exactly ten years to produce a song that is more sensational than that. ‘Gangnam Style’ was released in 2012. I guess what I’m trying to say is that perhaps the next time you’ll meet a song like ‘Gangnam Style’ will be in 2022."