Coldplay, BTS To Collab For New Single 'My Universe'; Fans Call It 'COLDTAN'

Coldplay and South Korean boy band BTS will be collaborating on a song. On September 13, Coldplay took to their official Twitter handle to announce the news. 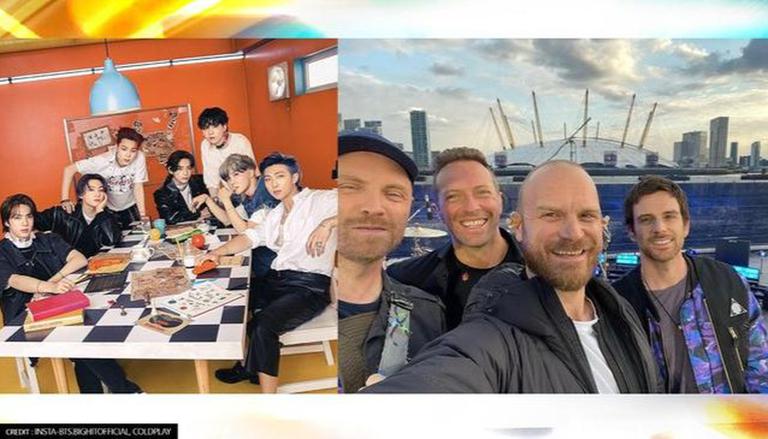 
Coldplay and South Korean boy band BTS will be collaborating on a song and it's official. On Monday, Coldplay took to their official Twitter handle and dropped the teaser image for their upcoming single titled My Universe. The new song features BTS and will be releasing this month! Read on to know more.

Taking to the micro-blogging site, Coldplay dropped a simple yet meaningful teaser image for their upcoming collaboration with the Bangtan Boys. Sharing the joyful news with fans, Coldplay wrote, "'#MyUniverse' // Coldplay X BTS // September 24th // Pre-order & pre-save now // https://coldplay.lnk.to/MyUniverse @bts_bighit @BTS_twt." As soon as the tweet was up, many fans rushed to express their excitement for the collab. A fan tweeted, "I can't wait for the masterpiece to release," while another one wrote, "Best collab of the century is coming. COLDTAN is coming." Several other fans dropped red hearts and heart-eyed face emojis.

I CAN'T WAIT FOR THIS MASTERPIECE TO RELEASE!!! pic.twitter.com/zXusWokO73

BEST COLLAB OF THE CENTURY IS COMING

So ready for it !!! Already Pre- Ordered 🙌🏻🍾 pic.twitter.com/SP7L9hXpoV

According to the purchase information, My Universe will be available as a limited-edition two-track CD single. The inside cover will include a reproduction of handwritten lyrics by both Coldplay and BTS. The two tracks are My Universe and its instrumental version.

READ | Did you know BTS' Jungkook once collapsed post their Chile concert in Wings Tour?

Earlier, in the month of July, many fans and BTS ARMY speculated that the K-pop band would be featured on Coldplay's new song, however, Warner Music Korea and Big Hit Music did not confirm the news. Recently, this month, Coldplay's frontman, Chris Martin and BTS had participated in an interview together about BTS' smash hit track, Permission to Dance challenge. A few days back on September 10, Martin also joined BTS for a special interview on YouTube's new segment, RELEASED. BTS held a Permission to Dance Official Premiere Party and introduced a Shorts Challenge version on BANGTANTV.

After introductions, the English songwriter kicked off by poking fun at himself as he admitted to being no professional interviewer. The humble BTS leader, RM had said that how he was fond of Martin. The two globally famous artists went on to discuss the ongoing pandemic and how it was important to spread joy and BTS' purpose behind the Shorts challenge.

READ | Ahead of Coldplay's AMA, fans root for a BTS and Coldplay collaboration

WE RECOMMEND
BTS RM's birthday: Check out Kim Namjoon's childhood pics as he turns 27 today
BTS’ ‘Fake Love’ becomes latest addition to band's 1 billion club on YouTube
Did you know BTS' Jungkook once collapsed post their Chile concert in Wings Tour?
BTS to meet South Korean President Moon Jae-in at the Blue House for a formal event
BTS' RM turns 28 as per Korean age: What is Korean age and how to calculate it? Explained