Friends star Courteney Cox took to her Instagram to congratulate British singer Ed Sheeran as his song Bad Habits charted the first position in The UK. 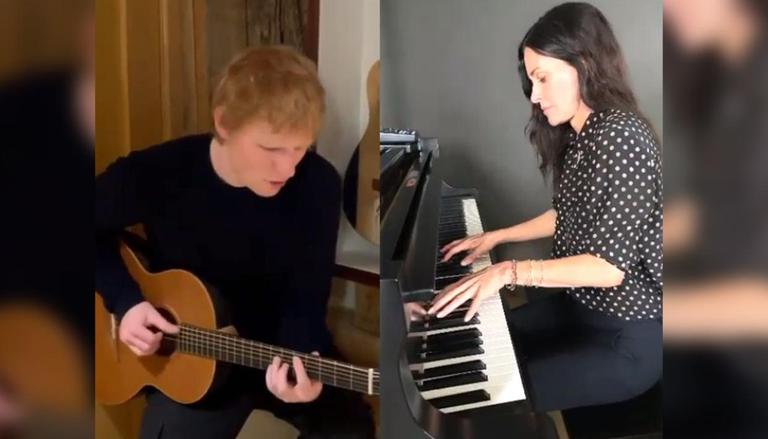 
Friends star Courteney Cox took to her Instagram to congratulate British singer Ed Sheeran as his song 'Bad Habits' charted the first position in The United Kingdom. Bad Habits has been Sheeran’s first solo song to come out since 2017 and the first new music since his collaboration album in 2019. The song, that came out on Friday, June 25 has taken over the music charts by storm.

Taking to her Instagram, Cox added a duet of Sheeran and herself jamming to the song. She can be seen congratulating him later in the video. The caption on the post read “ Bad Habits is #1 in the UK! Congratulations to @teddysphotos, to my J ♥️, and @fredagainagainagainagainagain! What an amazing job… so glad I have a reason to wear these fangs again.”

All about Courteney and Sheeran's friendship

Discussing his friendship with Courteney, a.k.a Monica from Friends, Ed Sheeran stated how he plays a hilarious prank on her every time he visits her house. The duo has been setting major friendship goals for all their followers and friends on Instagram for a while now. The four-time Grammy winner shares an amicable friendship with Cox as the former appeared at the Friends reunion. Both Cox and Sheeran recreated the iconic dance routine from the 90’s sitcom that Cox originally performed with her then co-star David Schwimmer.

Recently as a guest on The Late Late Show last month, Sheeran revealed how he got introduced to Courtney Cox after the host, James Cordon asked him about it. Sheeran mentioned that they got introduced through a mutual friend and how he has fun staying at her house and ordering unexpected items

On May 17, 2021, Ed posted a picture of him playing the guitar, captioned 'Somethings cookin' ' that hinted out the possibility of a new album on the way. His previous three albums were titled Plus (+), Multiply (x) and Divide (÷) respectively. The first official single for the album, 'Bad Habits' was released last month and the views on the video have already skyrocketed. The track shows Ed donning the look of a vampire in a pink suit.

READ | Ed Sheeran and Courtney Cox to collaborate on a music video? Sheeran teases new music
READ | If you loved Courtney Cox in Friends, here are her five other roles that you will enjoy

WE RECOMMEND
Courteney Cox says 'it hurt' being the only 'FRIENDS' star without an Emmy nomination
Courteney Cox opens up about her long-distance relationship with beau Johnny McDaid
Courteney Cox's birthday quiz: Check how well you know the FRIENDS alumnus' work
FRIENDS alumnus Courteney Cox "eats her way" through Disneyland in latest video; Watch
Courteney Cox signs up for a 'Margarita Showdown' with Andy Cohen for a good cause