Did You Know BTS Taught Megan Thee Stallion Their 'Butter' Hand Movements In The USA?

Did you know BTS members taught Megan Thee Stallion their 'Butter' hand movements and had a special guest to meet during their interaction in the USA? Watch - 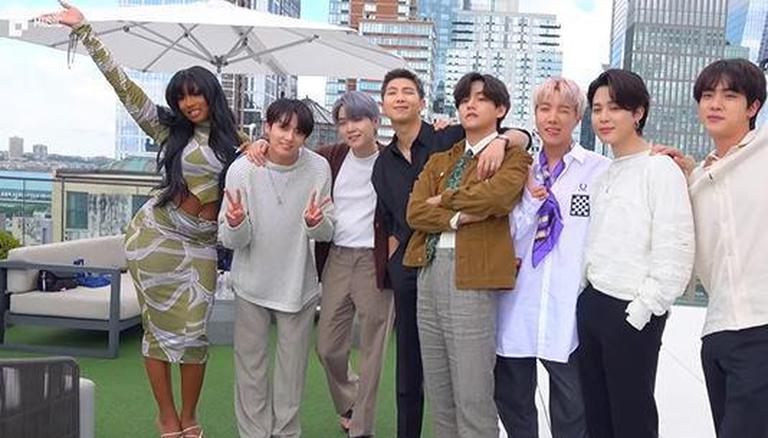 
BTS' Butter has been one of the biggest phenomenons in the global music space this year. The peppy track went on to establish numerous records, earning over 500 million views on YouTube alone. The song became a talking point across the globe; not just netizens, even one artist, Megan Thee Stallion, was impressed by it and went on to record a remix version of it.

However, this had been done without the artists meeting each other. But, their union finally took place and was a delightful event for fans of the singers. The band shared a video of the encounter, which had taken place in September in the United States of America, where they had multiple events lined up.

BTS, Megan Thee Stallion meet up in the United States of America

The meeting had taken place in New York when BTS had arrived in the United States of America last month, where they performed for the United Nations, and also met the popular band Coldplay. The video starts with Megan Thee Stallion shaking hands with each of the members, before starting a praise-filled conversation on a rooftop. The artists shared how much they were thankful to each other for their collaboration.

Megan is not happy with just one song, as she expressed her desire to join hands again. The rapper stated that they had to 'do the video' and 'do it big'.

However, that was not all. There was another special person in the meeting. Megan Thee Stallion's dog, a French bulldog named 4oe, too met the Dynamite stars. The dog was a highlight in the rooftop selfies.

While Megan recorded her version of Butter, three members of the band, J-Hope, Jimin, and Jungkook had also grooved to her remix.

READ | 'Shang-Chi': Simu Liu shares impressive backflip BTS that did not make it to the movie

Megan then expressed her wish to learn some of the moves that the band members performed in the video. She could then be seen trying out the hand movements as BTS members taught her the steps.

BTS' meeting with her was after their collaboration with Coldplay had made headlines recently. They became a part of the British band's track My Universe in their ninth studio album Music of the Spheres.

WE RECOMMEND
BTS' V aka Kim Taehyung tops 'Most Handsome Man in World 2021' once again
BTS' Suga's 'Daechwita' crosses 300 million views on Youtube; ARMY trends '#Daechwita300M'
BTS' 'My Universe' With Coldplay Debuts At No. 1 On Billboard Hot 100
BTS campaign with UNICEF raises $3.6 million and generates millions of tweets in support
BTS: Complaint filed against Jungkook in Fair Trade Commission, ARMY extends support
Listen to the latest songs, only on JioSaavn.com