Eminem surprised guests at the opening of his restaurant, Mom's Spaghetti in Detroit, Michigan as he turned up to serve his guests at the takeout window 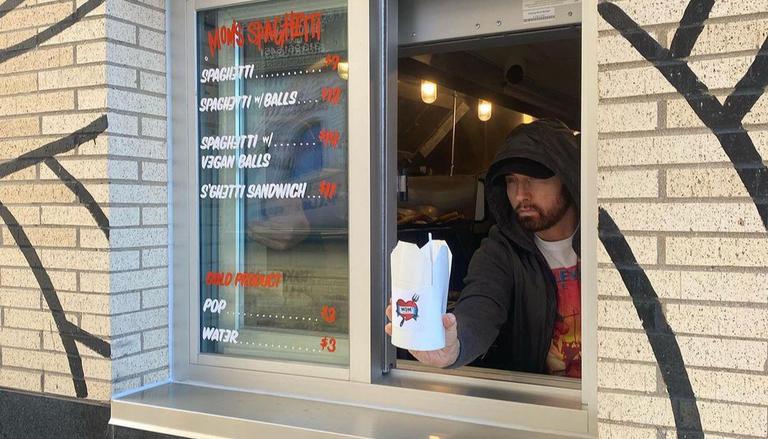 
Customers who turned up at the opening of Mom's Spaghetti restaurant in Detroit were in for a surprise. The owner of the restaurant, Eminem, was present to serve the guests on its opening day on Wednesday. Within no time, pictures and videos of the rapper at the takeout window of the eatery went viral on social media.

Eminem had earlier posted an advertisement about his restaurant on Instagram, writing, "Detroit- 2day is THE day. Come down for our pasta debut! 🍝 #MomsSpaghetti Grand Opening @ 5pm. (sic)" However, not many would have thought that the Grammy-winning rapper would turn up to serve guests himself. Eminem arrived at the venue in a car and was spotted at the serving window.

Eminem at his spaghetti restaurant

Not only does the restaurant offer pasta, but one also gets to take a look at Real Slim Shady's Rap Boy costume and other memorabilia, which are on display at a Trailer shop upstairs. One can buy some of Eminem and Mom's spaghetti merchandise as well. "Come by whenever, we are in business!" Rosenberg wrote.

Where is Eminem's spaghetti restaurant located?

Mom's Spaghetti is located in downtown Detroit, Michigan. The full address, 2131 Woordward Avenue had been shared by the multiple Grammy-winning artist in a promotional video. It is next to the Union Assembly.

The tagline for the restaurant is "Mom's Spaghetti, it's all ready."

The term 'Mom's Spaghetti' originated in Eminem's hit track from 2002, Lose Yourself. in which the lyrics read, "His palms are sweaty, knees weak, arms are heavy. There's vomit on his sweater already, mom's spaghetti."

Eminem could be seen posing with the take-out box on his hands in his usual hooded avatar.

What's on the menu at Eminem's restaurant?

Previously, Eminem had opened Mom's Spaghetti as a pop-up at a local club in 2017.