GOT7’s BamBam will soon be making his solo debut. His mini-album riBBon is all set to release this month. Here's a review of the teaser of the album 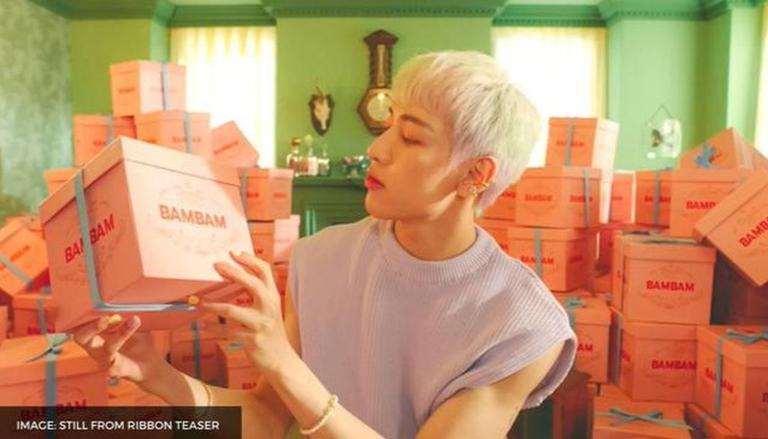 
The month of June 2021 is proving to be quite delightful for K-Pop lovers. Several K-pop artists have made their solo debuts this month. GOT7’s BamBam is all set to make his debut soon. He recently dropped the teaser of his upcoming mini-album riBBon. In one of his recent VLives, the Thai born K-pop artist also mentioned that his fans will see a completely different side of him in his upcoming mini-album. Here's everything you need to know about BamBam's solo debut album riBBon.

In the first scene of the dreamy BamBam's solo debut teaser, he is seen checking several gifts in a peach shade. The gift boxes have his name written on them. BamBam is sitting in a room painted in a pastel green shade. He is seen wearing a lavender knit t-shirt and is extremely clueless as to what is there inside the boxes. The colours in the frame are complementing BamBam's looks and the goofy song. In the second part of the teaser, he is sleeping on an enormous peach coloured gift box with a blue ribbon over it which also refers to the title of his album riBBon.

BamBam wore a peach knit shirt and paired it with white ripped jeans. He is seen looking for something. One can also see a blue sky behind the gift filled with lots of clouds. BamBam wore light makeup that complements the teaser's light and pastel-ish vibe. However, it was the final scene that enthralled viewers. BamBam's music featured his distinctive "Skrrt Skrrt", which was entirely unpredictable. It also delivers a preview of the music he will be producing. The album is scheduled to release on June 15, 2021.

About BamBam's songs with GOT7

The Korean boyband GOT7 includes band members namely Jay B, Mark, Jackson, Jinyoung, Youngjae, BamBam, and Yugyeom. They rose to fame after their debut Japanese single Around the World was loved by the audience. BamBam's song with the band such as My Swagger, You Calling My Name, One and Only You and Not by the Moon garnered them immense popularity.