What did Harry Styles say that made the telecaster bleep a part of his video? Know all about Harry Styles' Grammy acceptance speech and more below.

Grammy Awards 2021 was full of firsts for many artists. Beyonce broke the record for the female artist with the most number of Grammys. Taylor Swift too broke a record for getting the award of Album of The Year thrice. Similarly, on Music's Biggest Night, Harry Styles received his first Grammy award for the Best Pop Solo Performance for his song Watermelon Sugar High. The single had gone up against nominees including Justin Beiber's Yummy, Doja Cat's Say So, Billie Eilish's Everything I Wanted, Dua Lipa's Don't Start Now and Taylor Swift's Cardigan.

READ | Did Harry Styles and Louis Tomlinson ever date? A One Direction fan theory suggests so

Harry started off by thanking the producers of the song and elaborated on how it was written. He then went on to speak about the other nominees in the category, when that portion of the speech was muted. While many viewers are confused as to what the former One Direction member said in the bleeped portion of his speech, many fans have taken to their Twitter accounts to let the masses know.

What exactly did Harry Styles say that had to be bleeped?.... somebody tell me.#GRAMMYs pic.twitter.com/ZpVEOAvw8u

I thought it was just my tv! 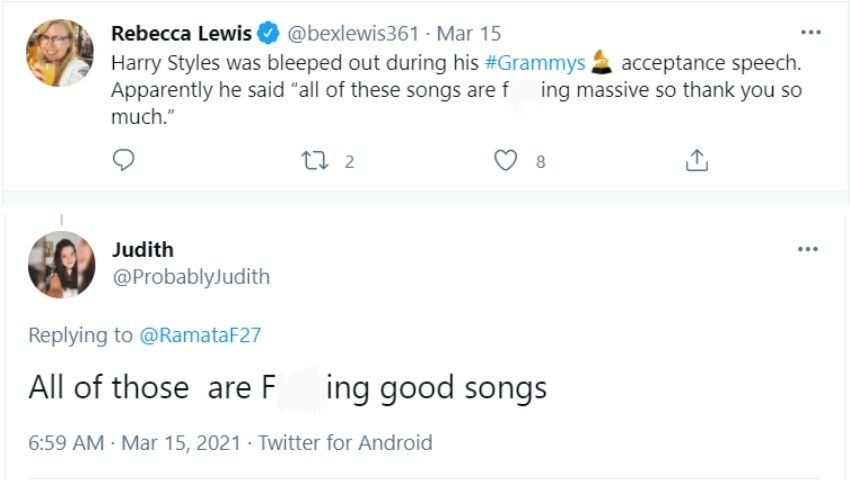 As explained by netizens, the Falling singer spoke about the other nominated songs being "F***ing massive". Notably, the entire uncensored speech is available on the Grammys official YouTube channel. In his speech, Harry explained that the hit pop song was written right after his first album was released. He spoke about how the inspiration struck him when he was in Nashville on a day off. He went on to express his gratitude for being a part of the celebrities present at the event.

What did Harry Styles wear at Grammy Awards 2021?

Harry was styled by Gucci for both his red carpet appearance and his performance on stage. For his red carpet appearance and for accepting his award, Harry wore a Gucci check Tweed jacket which was custom made for the singer. The jacket was layered over a knitted sweater vest. His look was complimented with flared velvet pants and a pair of leather boots. He finished the look with a purple feather boa.

For his live Grammys performance, Harry wore a head-to-toe leather ensemble. He wore a black leather jacket with no shirt. He also wore a pair of leather pants. Harry wore a pair of boots with GG chain detail added to it. Harry also added a fake fur olive green boa to his look.