South Korean boyband Stary Kids is considered one of the biggest bands of the fourth generation in K pop. Their second album 'Noeasy' achieved a huge milestone. 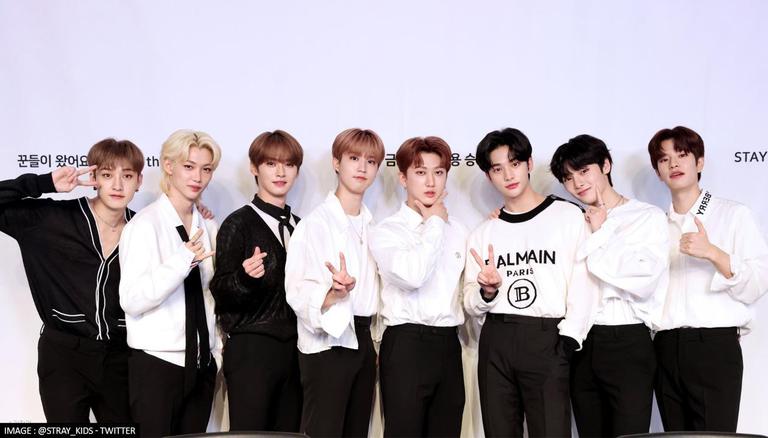 
Dubbed as the powerhouses of the fourth generation of K pop, Stray Kids have added another title to their name by becoming the first million sellers of JYP Entertainment. The group consisting of Bang Chan, Lee Know, Changbin, Hyunjin, Han, Felix, Seungmin, and I.N, has wide popularity in South Korea and overseas alike. In August, the band treated their fans with their second full-length album titled Noeasy.

The album was enjoyed by the fans and critics alike with the sale numbers soaring high internationally. However, the album has not only new Stays (Stray Kids fandom name) to their fandom but also made them the first-ever million sellers of JYP Entertainment, one of the four biggest K pop agencies in South Korea. But the sales have not stopped with the million mark as it has extensively grown to achieve exceptional numbers despite the prevailing situations of the pandemic.

According to a report from The Korea Times, the data from the local market tracker Gaon Chart revealed that the boyband sold over 1.22 million copies of Noeasy. Released on August 23, the second full-length album, produced by sub-unit 3RACHA including the member's Bang Chan, Changbin and HAN, offered a medley of EDM and hip-hop in their singles like Thunderous, Cheese, Domino, The View and SSICK. In the rest of the songs, the songs offered jazz-pop and rock feels.

With a huge fandom to back their ventures, the hype around their second studio album was enough to foreshadow the record-breaking sale numbers from JYP Entertainment. Ahead of its release, the album's 930,000 pre-orders made them the first-ever artist from JYP to do so. The impressive numbers were achieved by the band despite the pandemic, which seemed to have mildly affected K pop.

According to Yonhap News Agency,  Kim Jin-woo, Gaon Chart’s head researcher confirmed that over 24.59 million sales were recorded for the nation’s top 400 albums in 2019. Whereas, the count increased to 42 million in 2020. However, with 43 million sales, the year 2021 has already beat last year's record within only nine months. In other news, Stray Kids' Thunderous music video crossed over 100 million views on Youtube on October 18 to become the band's fastest music video to do so.