Lil' Kim Wants To Get On The Verzuz Stage With Nicki Minaj; Find Details Here

Lil' Kim wants to get on the Verzuz stage with Nicki Minaj. She revealed the same at the recent BET Awards on June 27, 2021. Read for details. 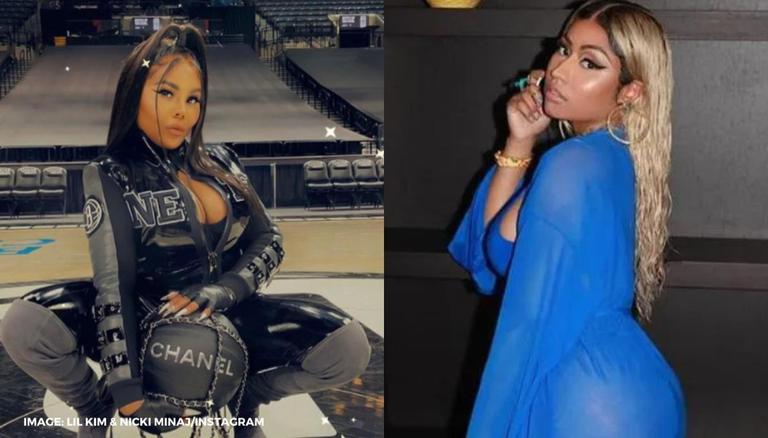 
The BET Awards were held with full pomp and show on Sunday at the Microsoft Theatre, Los Angeles. During the BET Twitter Pre-Show, American rap artist Lil' Kim revealed that she is looking forward to getting on the Verzuz stage with Nicki Minaj. Scroll along to know all the details that she had to share.

Lil' Kim wants to get on the Verzuz stage with Nicki Minaj; find details here

The BET Awards took place on June 27, 2021, and Lil' Kim made this statement, in a conversation with ET at the Pre-Show. Her answer came within a quick second, without any hesitation and the prompt reply is giving fans quite some excitement. Twitter is flooded with people talking about the two coming together for a Verzuz. While some are taking sides, others are saying that Kim and Nicki are from different rap generations and the latter should rather share the stage with Foxy Brown.

A Twitter user wrote, “I don't want a #NickiMinaj and #LilKim #VERZUZ two different generations. I want #FoxyBrown. Whatever Timberland said to Gucci and Jezzy they need to say the same thing to Fox and Kim. Nicki doesn't have anyone from her generation in my opinion”. While another user wrote, “#LilKim challenges #NickiMinaj to a #Verzuz #battle... Who you think would win?”. Take a look at some of the Twitter here.

Well...well...well. @LilKim has mentioned it! We need @NICKIMINAJ to answer her ASAP. If it’ll happen, it gonna break the female rapper industry 👏🏼👏🏼👏🏼👏🏼 #LilKim VS #NickiMinaj https://t.co/xFu9uGhoWQ

LIL KIM WANTS TO DO A VERZUZ WITH NICKI MINAJ??? WHATTT?????#BETAwards pic.twitter.com/28hrWdrIL2

I feel lil Kim and Nicki would be a good pair up for a verses! They both have many hits and do till this DAY have the BIGGEST influence in female hip hop than any other woman rapping ever! #nickiminaj #lilkim pic.twitter.com/NxzipTJIfD

The Barbs don’t even see @LilKim actually is being VERY nice and is giving Nicki Minaj a HUGE compliment!! #LilKim has respect for #NickiMinaj as a artist otherwise Kim would NEVER do this!I don’t like to hear SuperBass and Starships🙄 but THE 👑🐝 wants it so let’s go!! #VERZUZ

TRACK FOR TRACK, #LilKim not fucking with #NickiMinaj , Kim ain’t got enough ammo

Ones lives off her classics
The other still making classics

I don't want a #NickiMinaj and #LilKim #VERZUZ two different generations. I want #FoxyBrown. Whatever Timberland said to Gucci and Jezzy they need to say the same thing to Fox and Kim. Nicki don't have anyone from her generation in my opinion.

#LILKIM CHALLENGES #NICKIMINAJ TO A #VERZUZ #BATTLE .... WHO YOU THINK WOULD WIN? #HOLLABLOCK
Reposted from @thejasminebrand #LilKim wants a #verzuz with #NickiMinaj. Do you think Nicki will respond and/or accept? https://t.co/RouzJqRg1v

Both the rappers have had a feud that goes back several years ago and was most talked about when Kim released Black Friday, soon after Nicki’s debut Pink Friday. Kim also called Minaj a ‘Lil Kim Clone’ and also a ‘wannabe’. Alongside, Nicki’s songs Roman's Revenge, Tragedy, Y.U. Mad, Stupid Hoe, and I Am Your Leader are also said to be about Kim.

In August 2018, Kim indicated that she had put the differences behind in a radio interview with Real 92.3. The rapper said, “God bless Nicki, I wish her the best. She did what she did until she’s ready, hopefully, God puts it on her mind to do the right thing because she knows what she did. Once that happens, hopefully, everyone will stop asking me”. Prior to this in June 2018, Kim had also made that statement that she didn’t know who Minaj was, in a conversation with ET.

WE RECOMMEND
Nicki Minaj on 'Seeing Green': 'I’ve been washed on the track by Drake and Lil Wayne'
Nicki Minaj and Drake announce release of song "For The Love of New York"; Watch
Nicki Minaj shares video of son attempting to walk, netizens call him 'young king'
Nicki Minaj reacts to T-Pain saying that she refused to work with him in 2007
Doja Cat, Lorde, Migos, Nicki and Meghan Thee Stallion, all release music on the same day