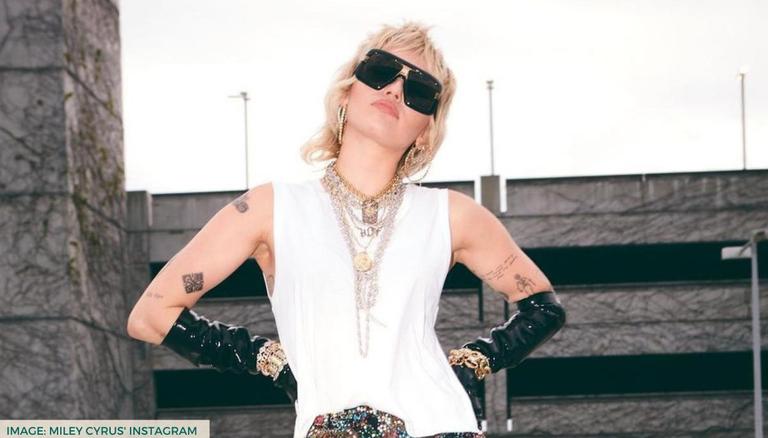 
Miley Cyrus is ready to add more Tesla cars to her collection. The Wrecking Ball singer recently took to Instagram and shared a few pictures of herself. Along with the pictures, Miley Cyrus wrote that she wants to keep working hard so she can buy Elon Musk’s cars. Miley Cyrus’ Instagram post comes days after it was announced that she will be performing on SNL as Elon Musk headlines the show.

Miley Cyrus is currently busy promoting her brand-new single, Without You featuring The Kid Laroi. The song trended on social media in no time. To promote this new single, Miley Cyrus is all set to perform at NBC’s hit show, Saturday Night Live. The Wrecking Ball singer is leaving no stone unturned to promote her upcoming performance.

Her recent Instagram post seems to be a subtle promotional stunt for the same. As mentioned earlier, Miley Cyrus posted a bunch of pictures of herself in a white tank top, embellished see-through pants with feathers at the bottom and some statement jewellery pieces. But more than the look, Miley Cyrus’ caption for the post grabbed attention.

Along with this Instagram post, Miley wrote, “Imma keep workin’ from dawn to dusk so I can keep buyin’ cars off @ElonMusk”. She further added, “See you soon dude”. Take a look at Miley Cyrus’ Instagram post below.

As mentioned earlier, Miley Cyrus will be the musical guest on the show in the SNL episode headlined by billionaire Elon Musk. Before this Instagram post, Elon Musk and Miley Cyrus even engaged in some Twitter banter. After SNL announced, Elon Musk as a guest host, the billionaire asked for some ideas for skits on Twitter.

Soon, many Twitter users chimed in with various hilarious skit ideas, but one idea grabbed Elon Musk’s attention. A Twitter user named Owen Sparks shared a photoshopped picture of Musk on a wrecking ball, a reference to Miley’s hit track. The hilarious idea struck a chord with Musk and he replied, “Might be something there haha”.

Even Miley Cyrus took notice of this SNL skit idea suggested by Sparks. She replied to this conversation by tweeting at Elon Musk and saying she is ready for this skit idea. Moreover, she created a unique hashtag for the same. Take a look at this Twitter banter between Miley Cyrus and Elon Musk below.

WE RECOMMEND
Miley Cyrus sings 'Without You' and mocks articles about her failed marriage with Liam
Miley Cyrus drops 'Without You' song with Kid Laroi; fans say it has 'Midnight sky vibes'
When Miley Cyrus confessed about being a 'really bad driver' on the sets of 'The Voice'
Miley Cyrus feels 'honoured' to join Taylor Swift & Lady Gaga to reach 1 Billion streams
Elon Musk to host 'Saturday Night Live' on May 8, Miley Cyrus will join as musical guest