Jassa Dhillon, one of the popular Punjabi singers, recently released his much-awaited music album Above All and has been receiving positive reviews from fans.

Jassa Dhillon is one of the prolific Punjabi singers and songwriters in the industry who has managed to gain a massive number of fan following with his stellar songs and albums. As the Punjabi artist is back with another one of his anticipated music albums, he has been receiving loads of love and amazing reviews from his fans. Take a look at Jassa Dhillon’s latest music album, Above All.

Punjabi artist Jassa Dhillon recently took to his Instagram handle and posted this thrilling piece of news for all his fans about his highly anticipated music album, Above All. He announced that his new music album was finally out and even added glimpses of all the songs of his music album to escalate the curiosity of his fans.

In the caption, he mentioned the names of all the team members who helped him deliver this amazing music album with some of the most spectacular bunch of songs. As Jassa Dhillon recently released a few other tracks from the album, he thanked all his fans for showering so much love on the initially released tracks, Raule and Above All from the album. He further stated how he hoped that people will like the other tracks from the album and will share their feedback with him.

As the fans were mesmerized with Jassa Dhillon’s songs from his music album, Above All, they took to his Instagram post and dropped in fire symbols in the comments section to depict how fiery all his songs were. Many of the fans were so thrilled to listen to his new album that they swamped his post with heart-eyed emojis to express their amazement. Some also stated how all the songs from Jassa Dhillon's album were awesome and epic and expressed their love for him. Take a look at how the fans reacted to the release of Jassa Dhillon’s music album, Above All. 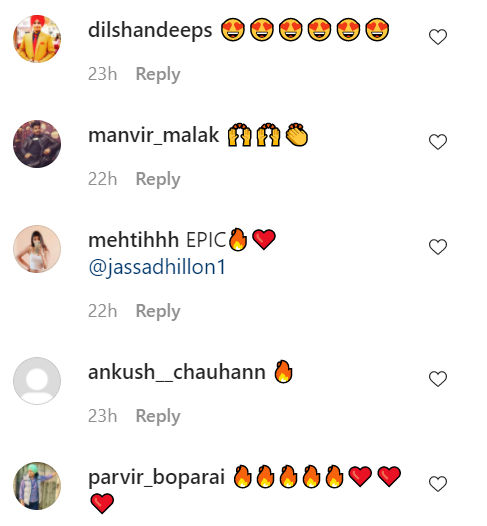