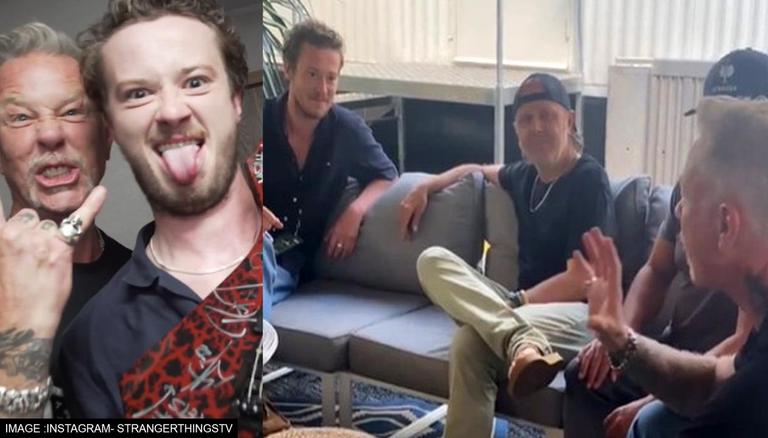 
Stranger Things' Joseph Quinn aka Eddie Munson got a chance to meet the American heavy metal band Metallica. He even had a jam session with the band on Master of Puppets at the Lollapalooza festival in Chicago. Netflix's sci-fi series Stranger Things returned with its fourth season and in the season Eddie had his own hero moment when he was stuck in upside-down and gave a phenomenal performance of Metallica's 1986 anthem Master Of Puppets on guitar. Eddie played the guitar in order to distract gruesome creatures away from his new friends.

In a video shared on Stranger Things Netflix on July 30, Joseph took viewers with him as he met the iconic group Metallica. The video starts with him saying, "Hey there! I'm backstage at Lollapalooza, about to meet Metallica." The video then cuts into some glimpses of Quinn and the band members having a jamming session.

Joseph asks, "Are you a fan of the show?", to which James Hetfield replied and expressed his love for the popular 80s sci-fi series Stranger Things as he says, "big fan, Have been since season one. My kids and I, it's been a bonding experience for us."

Joseph then says, "Thank you so much for letting us use the track". To this, one of the band members replies, "Thanks for doing this justice to the song, you definitely did". During a discussion on Master of Puppets, Joseph noted that he had the song on repeat for over 2 years, adding, "I feel very connected to you guys."

After that, all the band members and Eddie could be seen enjoying an intense jam session as they play Master Of Puppets.

On July 29, Metallica also gave a shoutout to Eddie Munson's epic Stranger Things finale guitar riff during their headline performance of Master Of Puppets at the Lollapalooza festival in Chicago. A person present at the concert shared a clip that saw Munson's performance of Metallica's 1986 anthem Master Of Puppets in Stranger Things, following which the crowd starts to screen.