What Happened Between Kirk Franlin And His Son? Leaked Phone Call Shocks Fans

Gospel Singer Kirk Franklin recently issued an apology after an audio of him cursing his son on a phone call went viral. Find out what happened between them.

Recently, an audio was leaked on Twitter that caused a huge controversy. What made the audio especially scandalous was that featured a private conversation between the 51-year-old gospel singer Kirk Franklin and his estranged son Kerrion Franklin. Immediately after the leaked phone call went viral fans took to social media to express shock and even started picking sides, as to who was more at fault in the conversation.  Find out what happened between Kirk Franklin and his son?

READ | Who has the most Grammys? Hint: It's not Beyonce or Jay-Z or Quincy Jones

What happened between Kirk Franklin and his son?

The disturbing audio features the gospel musician cursing at his son while talking to him. Many fans were shocked at the use of profane language by Franklin. His son Kerrion is heard saying, 'I Dare You!' as the 51-year-old singer curses him angrily.

After the video went viral, Kirk Franklin took to his social media on Saturday, March 13 to share a video of himself expressing regret over the scornful phone call. During the disturbing conversation, the Grammy-winning singer is heard saying, “I’d put my foot in your a--" and "break your neck if your ever disrespect me.” In his minute-long apology, Franklin went on to explain that he's had a "toxic" relationship with his 32-year-old son over the years. He revealed that he's attempted to remedy their problems through counselling and therapy.

READ | Where Was The 'War Wagon' filmed? Know About The Locations Of This Kirk Douglas Movie

Franklin said in the apology video, "Recently, my son and I had an argument that he chose to record. I felt extremely disrespected in that conversation and I lost my temper, and I said words that are not appropriate”. "I am sincerely sorry to all of you, I sincerely apologize." Franklin then added that his son had failed to play a part in the conversation where the artist had to call the family therapist immediately to intervene. He said, "I'm not perfect, I'm a human and I'm going to make mistakes, and I'm trying to get it right.”

How did netizens react?

One Twitter user named ‘JoyK’ said, “We listened to the Kirk Franklin audio and at the end I was like ...mind y’all business. Another user named ‘Joe Williams’ said that he had just heard the Kirk Franklin leaked phone call and he felt as though Franklin was just a frustrated father who’s son was being disrespectful. A third user named ‘TooFar Shakur’ said that he was shocked that Franklin’s 33-year-old son was leaking their private phone calls. The user then added that he felt as though Franklin was making an honest assessment.

we listened to the Kirk Franklin audio and at the end I was like ...mind y’all business pic.twitter.com/f7NHo4dA6L

I just heard the Kirk Franklin audio... AND??? He's a frustrated father who's son is being disrespectful... 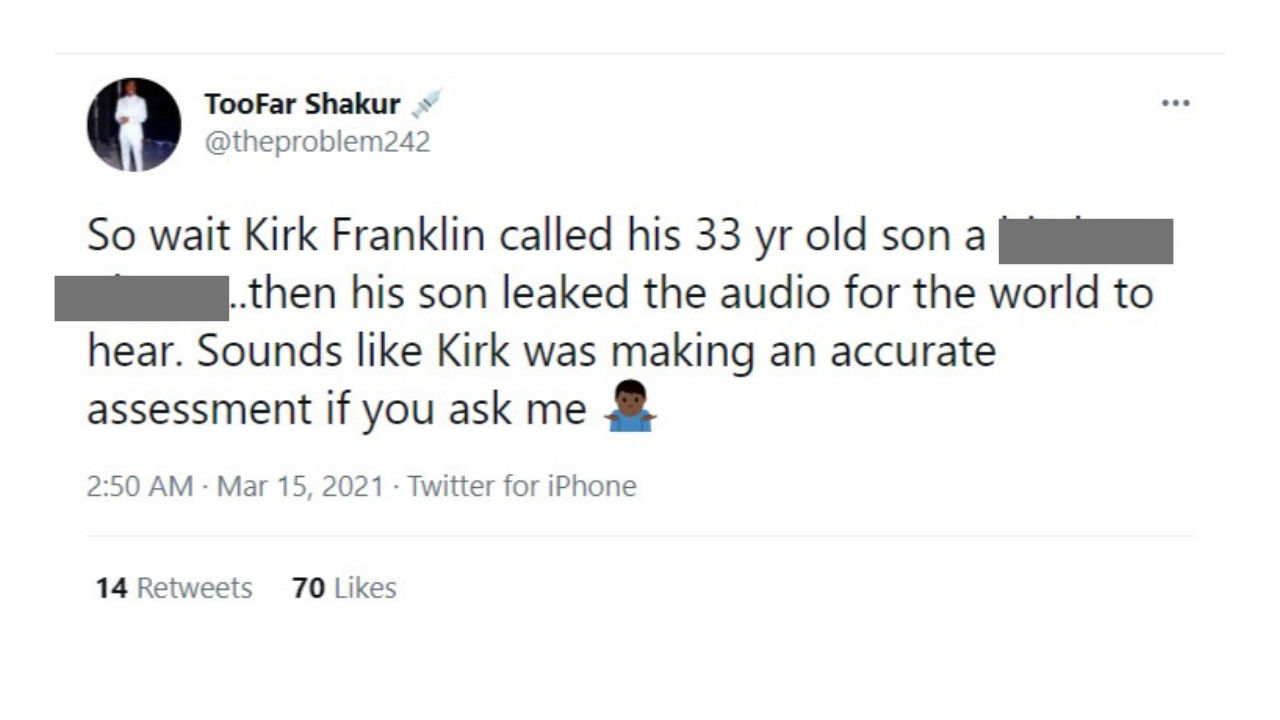