As India celebrated the Armed Forces Flag Day, Pawan Kalyan donated Rs 1 crore to the Kendriya Sainik Board for the jawan families. He thanked PM Modi too.

Pawan Kalyan announced that he is donating Rs 1 crore to the Kendriya Sainik Board, on the occasion of the Armed Forces Flag Day. Highlighting the sacrifices of the armed forces, the actor-politician also called on his fans and the citizens of the country to show their ‘solidarity' by coming forward and contributing. He also conveyed his gratitude to Prime Minister Narendra Modi for reminding the country of the 'responsibility' to the nation.

Taking to Twitter on Friday, a day before the Armed Forces Flag Day was celebrated, Pawan Kalyan shared a video where he sent a message in Hindi, “This is the day to honour the armed forces. This is an important day for our country. They sacrifice their lives for our motherland; this a day for the shaheeds. They have fulfilled their responsibility by giving their lives. Now it is the turn for us to do something for them. Kendriya Sainik Board has come up with several initiatives for the soldiers and those jawans injured. You also come ahead and make your contribution for them. This is our responsibility being the citizen of the country. We should not forget it. Jai Hind!” Pawan Kalyan also shared a letter that the Kendriya Sainik Board had written to him, where some of the facts related to the day were shared. KSB also urged him to record a video to spread the message to his followers.

I am donating Rs1 crore to the
‘kendriya sainik board’ for the welfare our soldiers families. I will personally handover the DD to the concerned authorities in Delhi. My heartfelt gratitude to ‘PM Modiji’ for reminding our responsibility towards our Nation🙏#ArmedForcesFlagDay 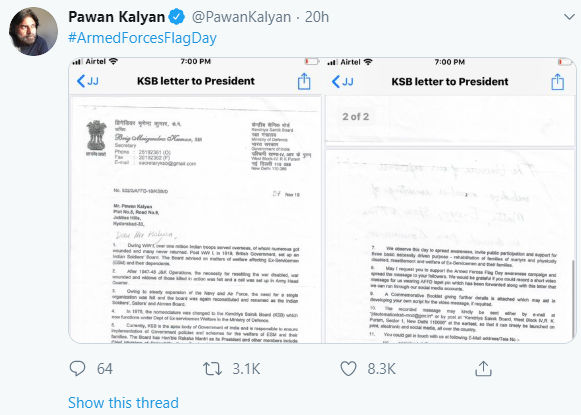 In another tweet, the Jana Sena Party Chief wrote, “Let’s show our solidarity to the call given by our Beloved & Hon. PM Shri Narendra Modi ji to support generously for the families of armed forces through ‘Kendriya sainik board’ on #ArmedForcesFlagDay 7th December. Jai Hind!" He also shared paper clippings of the Telugu industry supporting the Indian  Army during the Kargil War. 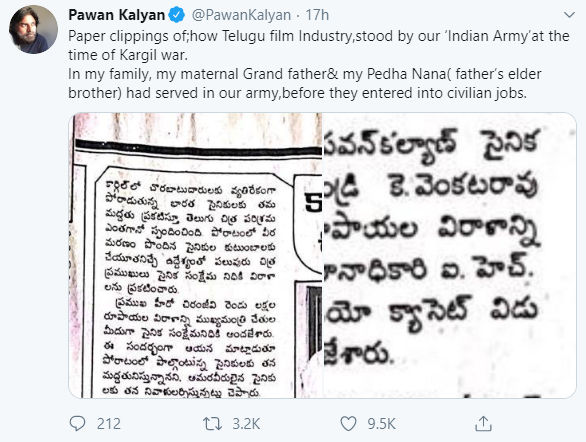 Prime Minister Narendra Modi had honoured the contribution of the Armed Forces. He had shared a video on Twitter. He wrote, “On Armed Forces Flag Day we salute the indomitable courage of our forces and their families.I also urge you to contribute towards the welfare of our forces.”

On the professional front, Pawan Kalyan is generally in the news for his political activities. On the film front, he last featured in  Agnyaathavaasi in 2018. The actor-politician is now all set to star in the Telugu remake of Pink.