As protests against the Citizenship Amendment Act (CAA) were held countrywide, the crew of Malayalam films like 'Unda' and 'Sudani from Nigeria' also joined in.

The cast and crew of Malayalam films have expressed their displeasure over the Indian Parliament passing the Citizenship Amendment Act. After the team of Mammooty-starrer Unda protested against the CAA (which was then a bill) at the International Film Festival of Kerala a few days ago, now the makers of Sudani From Nigeria have voiced their concern as well. The crew has announced that they will be skipping the National Awards event in protest against CAA and the National Register of Citizens. Sudani From Nigeria was announced as the Best Malayalam Film by the National Awards jury.

READ: BJP Flays Hartal Against CAA In Kerala On December 1

Apart from the National Award for Best Malayalam Film, Sudani From Nigeriawas also honoured with five awards at the 2018 Kerala State Film Awards, including Best Actor for Soubin Shahir and Best Screenplay, Best Film with Popular Appeal and Aesthetic Value, Best Debut Director, and Best Character Actor (female). The movie is a sports drama that revolves around a Nigerian joining a football club in Kerala.

READ:Protests Continue Over CAA In New Delhi On Sunday Night

Not the only one 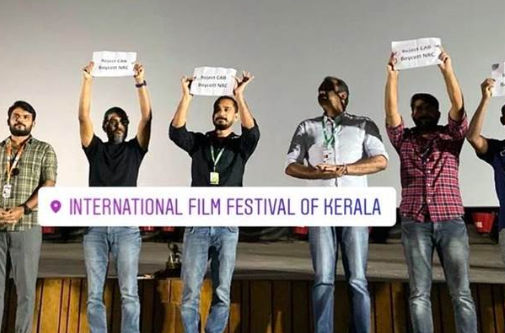 After the Citizenship Amendment Bill was passed in the Lok Sabha, the crew of Unda had protested by coming to the stage and holding placards at the IFFK on December 11. The plot of the movie revolved around a team of police officers, led by Mammootty, tackling the security situation in Maoist-infested Chhattisgarh during elections. The movie was unanimously acclaimed by the critics.

Apart from the Malayalam films, stars associated with the Hindi film industry too lashed out at the passage of the bill. Mahesh Bhatt, Soni Radan, Swara Bhasker and many other stars have expressed their disapproval of the act. Some have also participated in protests.

READ:Guv Jagdeep Dhankhar: CAA Is Law Of The Land, West Bengal Should Accept It