Harnaaz Sandhu Wins Miss Universe 2021: Check Out All Her Winning Answers From The Pageant

India’s Harnaaz Kaur Sandhu made history after she was crowned Miss Universe 2021 while joining the league of Lara Dutta and Sushmita Sen. 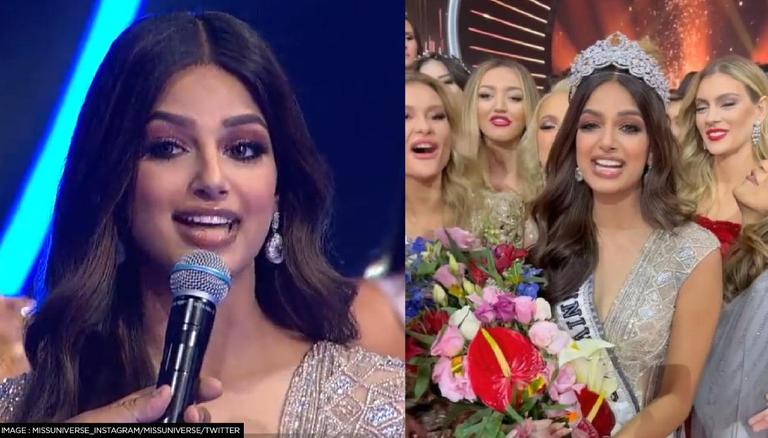 
India's Harnaaz Kaur Sandhu made history after she was crowned Miss Universe 2021. Harnaaz brought the pride back to India after 21 years while joining the league of Lara Dutta (2000) and Sushmita Sen (1994).

Harnaaz, who hails from Chandigarh and bagged the coveted pageant, passed through a plethora of questions that were asked of her, and emerged victoriously.

Sandhu, who has worked in a few Punjabi films, including Yaara Diyan Poo Baran and Bai Ji Kuttange, is pursuing her Master's degree in Public Administration. During the contest, the actor-model had to go through a lot of questions that were put across to her by the judging panel, and she answered them with utmost confidence.

Before getting the crown, the judges hurdled two questions in the Top 5 and Top 3 rounds, respectively.

To select the top 5 from the rest, Harnaaz was asked ‘Many people think climate change is a hoax. What would you do to convince them otherwise?’ Giving a straightforward reply, she said, "Honestly my heart breaks to see how nature is going through a lot of problems, and it’s all due to our irresponsible behavior. I totally feel like this is the time to take action and talk less because each action could either kill or save nature. Prevent and protect is better than repent and repair, and this is what I’m trying to convince you guys to do. Thank you."

Final questions are here! The first to go is India. #MISSUNIVERSE

The 70th MISS UNIVERSE Competition is airing LIVE around the world from Eilat, Israel on @foxtv pic.twitter.com/xpPLfORQXA

After qualifying the round and upon reaching the Top 3, she was asked, "What advice would you give to young women watching on how to deal with the pressures they face today?"

Responding to the question she said, "I think the biggest pressure the youth today is facing is to believe in themselves. To know that you are unique and that is what makes you beautiful, stop comparing yourselves with others and let’s talk about more important things that are happening worldwide.

I think this is what you need to understand. Come out and speak for yourself because you are the leader of your life, you are the voice of your own. I believed in myself, and that’s why I’m standing here today."

The 21-year-old from Punjab bested more than 70 other women at the Miss Universe 2021 pageant that concluded in Israel. The second runner-up was Lalela Lali Mswali of South Africa while Paraguay’s Nadia Ferrera was named the first runner-up.

READ | Who is Harnaaz Sandhu? Know all about the Miss Universe 2021 Winner from India

The 70th MISS UNIVERSE Competition is airing LIVE around the world from Eilat, Israel on @foxtv pic.twitter.com/wwyMhsAyvd

WE RECOMMEND
Harnaaz Sandhu crowned Miss Universe 2021, title comes back to India after 21 years
IMD predicts light to moderate rainfall in many places across India for next 3-4 days
India to launch its first space station by 2030; soon after manned 'Gaganyaan' mission
Real Madrid vs Atletico Madrid live stream: How to watch Madrid Derby in India, US and UK?
Owaisi slams Rahul Gandhi for Hindutva remark; 'India belongs to all Bharatiyas'
Listen to the latest songs, only on JioSaavn.com