Mahira Khan, who is best known for her stint in Raees recently shared a picture of her self on Instagram on January 22 which has taken the internet by storm.

Mahira Khan, who is best known for her stint in Raees, recently shared a picture of her self on Instagram which has taken the internet by storm. While her new post may have left many internet users a little bit confused, but the caption surely won hearts. The photo uploaded on January 22, at first appears to show her lying on her side, but a closer look at the pic reveals that she is standing upright, however, her picture is not.

It seems like the 35-year-old actor refused to 'adjust the picture' before posting. In the caption, she even explains why she did not rotate the picture for her 5.4 million Instagram followers to see. In the photo which has already received almost two lakh likes and thousands of comments, she can be seen wearing a light blue dress with her hair pulled back in a bun.

While several netizens called her 'cute' and 'beautiful' and showered her with many compliments, others left hilarious comments. One person wrote, “That's a funny caption”. Another wrote, “OMG!! U scared the hell out of me! I was wondering why r u lying on the floor”. Third person wrote, “For a second, I thought you were laying down haha”. You are already adjusted to the level of perfection ‘ u see my comments i know as i always do on every post, someday please bless me with a reply its a request,” added another internet user. 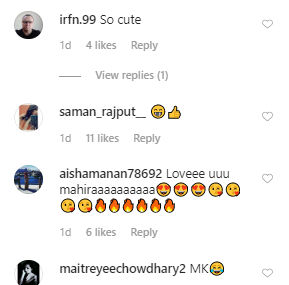 READ: Mahira Khan Gives It Back To A Troll For Shaming Her Over Viral Pictures With Ranbir Kapoor

Mahira all set to attend PISA

Mahira Khan has also featured in several successful television shows like Humsafar and Shehr-e-Zaat and became a household name after the show aired in India. The Pakistani actor is also all set to attend the Pakistan International Screen Awards (PISA) in Dubai on February 7 with other superstars including Fawad Khan and Ali Zafar. Khan is also the only actress to enter Bollywood's '100 crore' club after her movie 'Raees', starring Shah Rukh Khan. The movie became a big hit on the box office and she was recently also appointed as National Goodwill Ambassador for UNHCR back in November 2019.

READ: Mahira Khan's Heartwarming Wish For Son Azlan On His 9th Birthday Is Winning The Internet