Samantha Akkineni-Naga Chaitanya are gearing up for their fifth film together, ‘Majili’ and naturally since its their first full-fledged pairing up after marriage, the buzz is at its peak. The trailer of the love story was unveiled with fanfare with Nagarjuna also making an appearance. At the event, the Tollywood star revealed that even he didn’t know about the relationship between his son and now-daughter-in-law at the time of their relationship and it was their dog who first hinted about it to him. 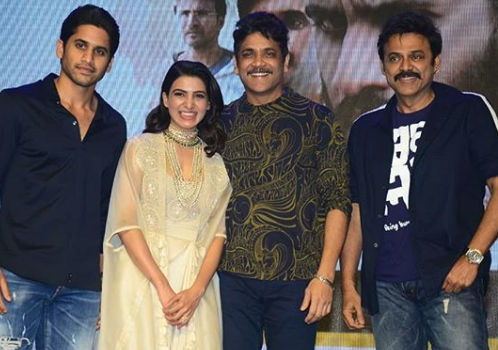 READ: ‘It Took Us Eight Years To Be At The Same Point’: Samantha Akkineni Opens Up On Her Relationship With Naga Chaitanya

At the trailer launch event, Nagarjuna said, "After seeing ‘Ye Maya Chesave’, I was awestruck by the music, story and the chemistry between the hero and heroine.

“After four years, they both acted with me in ‘Manam’ and I couldn’t suspect or find out that there is something going on between them. They both made sure that I didn’t know anything and after a few months, I realised they were already in love with each other.”

READ: Samantha Akkineni Accidentally Twins With Her Mother-in-law And Husband Naga Chaitanya Has The Best Reaction To It

Continuing with a funny story, the ‘Brahmastra’ star added, “In fact, when Sam came to my house, my pet dog was very friendly towards her which is when she revealed that she had visited my house several times and that she knew Leo (our dog) very well!”

The couple might not be much at fault since Samantha had recently revealed that it took them eight years to reach the same space in the relationship. Nevetheless, the family would hope for 'Majili' to work wonders at the box office.

A film very special to me for obvious reasons #ChaySam4 .. happy to be starting the year with this .. #Nc17 is #Majili advance happy new year to all of you , it’s been a dream working with this team .. see you this April