Siddharth took a dig at Finance Minister Nirmala Sitharaman's remark on onions. He said one must base their food preferences like her and be quiet about prices.

Finance Minister Nirmala Sitharaman once again became a talking point on social media after her remark on onions amid its increasing prices. The minister was at the receiving end not just from the netizens, who used their creativity, but also from the celebrities, after she said that her family did not eat onions. Siddharth too took a jibe at the minister, by saying that everyone now needed to consume food as per preferences of the ‘said family.' The Rang De Basanti actor quipped that everyone should be quiet about the onion prices, by also sharing an old tweet of Union Minister Smriti Irani about ‘high value transactions’ involving onions.

Siddharth took to Twitter on Thursday and wrote, “Nirmala Sitharaman has said she doesn't come from a 'parivaar' that eats onions. Now we all have to eat our daily food based on preferences of said family. Everybody keep quiet about the price of onions. Shhhh.” (sic) Along with the tweet, he added a screenshot of a tweet of Union Minister for Textiles and Women & Child Development, Smriti Irani. In 2010,  she had taken a dig at the high onion prices by writing, “Income Tax dept is keeping a watch on all high value transactions... Don’t buy onions. :-)" (sic)

READ: Nirmala Sitharaman In Lok Sabha: 'I Don't Eat A Lot Of Onion' 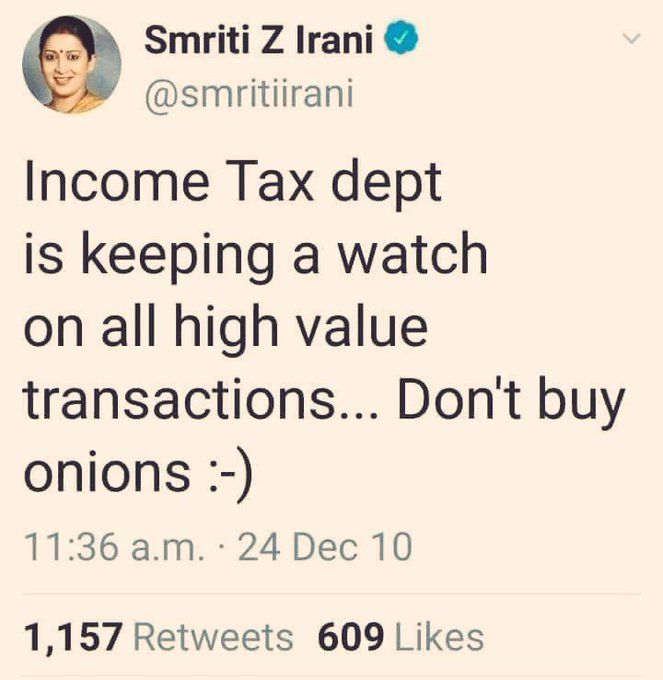 Minister Nirmala Sitharaman on Wednesday, had said in the Parliament, "I don't eat much of onion and garlic. I come from such a family which doesn't have much to do with onion."Before Siddharth, former Union Minister P Chidambaram also took at a dig at the Finance Minister. When asked about Sitharaman’s statements, Chidarmbaram said, "The Finance Minister said yesterday that she doesn't eat onions, so what does she eat? Does she eat avocado?" Congress too held a protest outside the Parliament, terming them as ‘arrogant’, ‘insensitive’ comments by the Finance Minister.

Leaders of the Congress Party protest outside Parliament against rising inflation & soaring prices & the arrogant, insensitive comments by the FM @nsitharaman#SayItLikeNirmalaTai pic.twitter.com/49jysPLPbM

READ: You May Get Income Tax Notice For Purchasing More Onions: Cong Leader's Jibe At Centre