As 2021 comes to an end, here's a look at hit songs, music artists and hashtags that have been the most Tweeted about through the year. BTS tops the list. 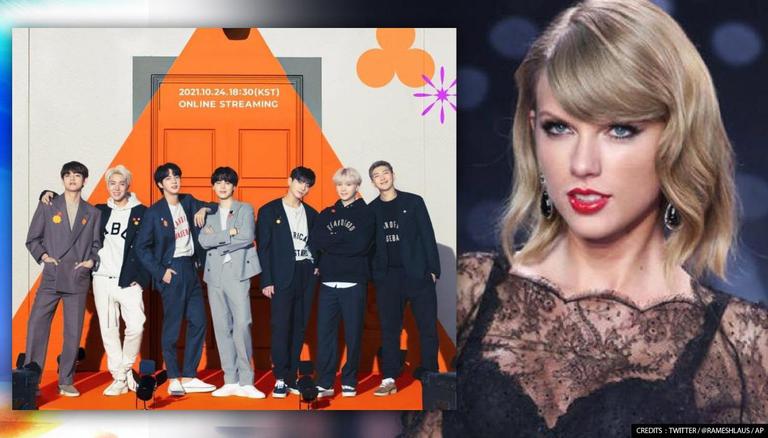 
Despite the COVID-19 pandemic continuing through 2021 and affecting the entertainment industry, the year saw the release of several hit songs and albums by popular artists such as BTS, Taylor Swift and AR Rahman.

As the year comes to an end, here's a look at the most tweeted about artists, songs, and hashtags, ranging from BTS's Permission To Dance and Exo's Don't Fight The Feeling to AR Rahman and Taylor Swift.

The fact that BTS members broke records while garnering millions of Instagram followers within minutes of opening individual accounts on the social media platform makes the K-Pop boy band an obvious favourite on Twitter as well. Their songs Butter, Permission To Dance, Dynamite and My Universe and also on the list of the most tweeted about songs of the year.

The much-loved Indian artist, who is fondly called India’s nightingale is also on the list of most-tweeted-about artists of the year. Mangeskar recently celebrated her 92nd birthday and wishes poured in for her on the micro-blogging site.

The Oscar-winning music composer is one of the most popular musicians in India and often engages with his fans and followers on Twitter. He asks for their opinions on his music and has conversations with them regularly.

The artist was one of the most talked-about in 2021 when she released a version of several of her old songs. Her re-released versions of two albums, Red and Fearless had Twitter buzzing about her work.

READ | BTS members get their own New Year avatars ahead of YouTube's Escape 2021; See here

The singer often shares his thoughts and work on Twitter and is active on the platform. His most recent number, Echo, received love and praise on the platform from fans across the world.

BTS's hit number Butter has been the most-tweeted-about song this year. The song was released in 2021 and according to the Billboards, it has over 2.9 million Twitter mentions. Butter was on the Billboard Hot 100 list for 10 weeks after its release and was loved by fans across the globe.

READ | What is BTS' Crosswalk? All about band's concert on 'Late Late Show with James Corden'

This BTS number also won the hearts of BTS' fans - the ARMY - and was also performed by the fan-favourite K-Pop boy band at the United Nations General Assembly. The music video of the number was hailed across the globe.

Released in 2020, Dynamite was one of BTS' most successful and loved numbers. Even though it was released last year, it still remains in the top five tweeted about songs of 2021.

My Universe marked the iconic collaboration between two fan-favourite bands, BTS and Coldplay. The music video of the number had a space theme and was a visual treat for fans to enjoy. The team received heaps of praise for the technology used to create the video.

EXO was yet another K-Pop band to delight fans and their song Don't Fight The Feeling was a special one for the band as they announced their comeback to the industry with it in May. After the band took a break, their return to music had fans thrilled and elated.

Most Tweeted hashtags in music in 2021

The K-Pop band's popularity is increasing by leaps and bounds and is loved globally. The unstoppable band has broken several records and continue to grow in their field.

The Billboard Music Awards were Tweeted about extensively on Twitter as fans rooted for their favourite artists to bag awards. The Awards also held digital voting on Twitter, increasing their engagement on the platform.

The 8th edition of the awards took place in 2021 and celebrated the most-loved artists on iHeartRadio stations. This awards ceremony also used several ways in which they interacted with and sought opinions from fans on Twitter.

The Korean girl band, BLACKPINK, rose to fame and has taken the world by storm. The band recently celebrated their 5th anniversary and took fans through their performances and milestones over the years on the micro-blogging platform.

The group is yet another global K-pop phenomenon. The members of the band recently contracted COVID, which became a talking point on Twitter and started a conversation.

WE RECOMMEND
US members of Congress warn new Twitter CEO of China's malign activity on platform
'Pushpa: The Rise' Twitter review: Fans stunned by Allu Arjun's mass avatar
Twitter responds to hacking of PM Modi's account: 'No signs of other impacted account'
Twitter followers drop: Why are my Twitter followers dropping? All you need to know
Ex-Twitter India head Manish Maheshwari quits company to join ed-tech venture
Listen to the latest songs, only on JioSaavn.com