What Happened To Dixie And Griffin? Find Out If The TikTok Couple Has Broken Up

Rumours suggest, not all is good in the hood with one of TikTok's most favourite couple Dixie and Griffin. Read on to find out what has happened to the couple.

Many rumours were making rounds when TikTok stars Charli D’Amelio and Chase Hudson broke up, and Chase Hudson took to Twitter expose other many other TikTok couples who were reportedly cheating on each other. The post also featured Dixie D'Amelio and Griffin Johnson's name, although it did not reveal much about the couple's relationship. 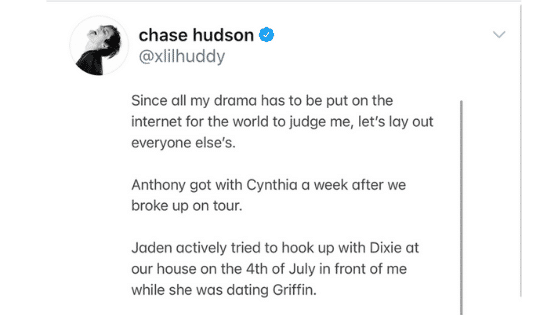 Read | Charli D'Amelio and Chase Hudson drama: Find out what led to a Twitter war between the two

Did Dixie and Griffin break up?

As the TikTok drama continues, this time there is pretty heartbreaking news for all the TikTok viewers. According to the reports of an entertainment portal, one of TikTok’s beloved couple Dixie D’Amelio and Griffin Johnson have called it quits. The entertainment portal, also reported that Charli D’Amelio’s elder sister Dixie has unfollowed her alleged ex-boyfriend on Instagram and Twitter on Thursday, July 30.

Read | How does Addison Rae know the Kardashians? Here is how they became friends

What happened to Dixie and Griffin?

The former TikTok couple has reportedly broken up since amidst serious cheating allegations on the 21 years old TikTok celebrity Griffin Johnson. An entertainment portal also reported that Griffin changed his Twitter head from a picture with Dixie to a picture with his friends, all donning a mask. The drama became more intense when a girl named Madison Galley posted a video on TikTok.

According to the reports of an entertainment portal, the video was titled,” Keep watching if you want to see me expose Griffin Johnson,”. In the video, Madison Galley showed screenshots of Griffin adding her on Snapchat, and also added the fact that he is single. Madison also showed, the 18-year-old TikTok Star and singer, Dixie D’Amelio seemingly reaching out to her. As the video went viral, a flurry of other TikTok celebrities joined the drama.

Did Griffin cheat on Dixie?

The entertainment portal reported that Thomas Petrou, who is a well-known social media star and the founder of the TikTok group Hype House, took to Twitter and referenced Dixie and Griffin’s break up to, the Chase Hudson drama earlier this month. The tweet has been deleted. No cheating allegations have surfaced on the internet against Griffin Johnson, since the couple’s alleged break up so far.

Read | Will Addison Rae be on Outer Banks Season 2? Know if the TikTok Star will be acting soon

Dixie and Griffin’s break up: How did Charli D’Amelio react?

In the true D’Amelio sisters fashion, the 16-year-old TikTok star, Charli D'Amelio stepped in to support Dixie. Charli didn't comment on Dixie and Griffin’s alleged breakup and the cheating rumours. However, she did tweet out an "appreciation post" for her sister Dixie D’Amelio who recently graduated high school.