After 'Navarasa' Release On Netflix, Netizens Trend #BanNetflix On Twitter; Here Is Why

Mani Ratnam's Navarasa finally dropped on Netflix on August 6. Soon after the release, #BadNetflix started started on Twitter. Find out why. 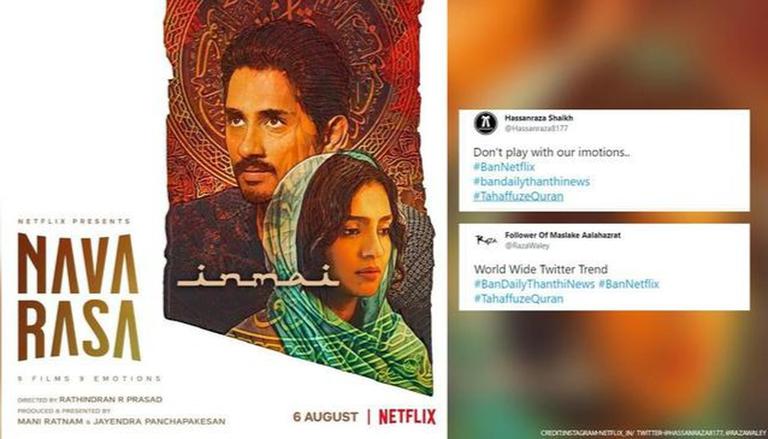 
Mani Ratnam's highly anticipated nine-part anthology titled Navarasa was released on Netflix on Friday. Many netizens were quick to express their views on the movie, which received mixed reviews on social media. However, the movie has come under severe scrutiny of an organization for hurting religious sentiments.

Filmmaker Mani Ratnam's anthology was released at 12:30 PM on Friday on Netflix. After receiving mixed reviews by the netizens, the Raza Academy organisation called for strict action against the streaming platform their use of a Quran verse for the film's advertisement in a Tamil newspaper called the Daily Thanthi newspaper. The organization took to their Twitter to call out the OTT platform for writing the verse, and wrote, "Netflix has published a verse of the Quran in the advertisement of its film NavaRasa in Daily Thanthi newspaper معاز اللہ This is an insult to the Quran. We demand strict action against @NetflixIndia #BanNetflix #BanDailyThanthiNews #TahaffuzeQuran".

Netflix has published a verse of the Quran in the advertisement of its film NavaRasa in Daily Thanthi newspaper
معاز اللہ
This is an insult to the Quran. We demand strict action against@NetflixIndia#BanNetflix #BanDailyThanthiNews #TahaffuzeQuran

The tweet was acknowledged by several netizens, who also took to their handles to voice their dismay. Soon, the hashtag #BanNetflix started trending on the microblogging site. One user said, 'Why do you print Quran on film poster? #TahaffuzeQuran #BanNetflix #BanDailyThanthiNews," while another tweeted, "We demand to change the poster And remove it from everywhere".

READ | Navarasa trailer out: 9 different characters offer a unique 'rasa' in each story

The poster in question is from debutant director Rathindran R Prasad's episode titled Inmai. The episode featured Siddharth and Parvathy in lead roles.

WE RECOMMEND
Mani Ratnam's 'Navarasa' lights up Burj Khalifa, celebrates Tamil cinema's cultural pride
Sydney Freeland to direct ‘Rez Ball’ for Netflix; says “I am beyond excited"
Luis Guzman to star in upcoming Netflix series 'Wednesday' based on The Addams Family
Netflix lost almost half a million users! Check out the reason behind this steady decline
Love is in the air: Binge-watch the 5 most romantic movies and shows on Netflix