As the country battles to fight the deadly COVID-19 pandemic, actor Napoleon Duraisamy made a generous donation of Rs 25 lakh to CM relief fund. 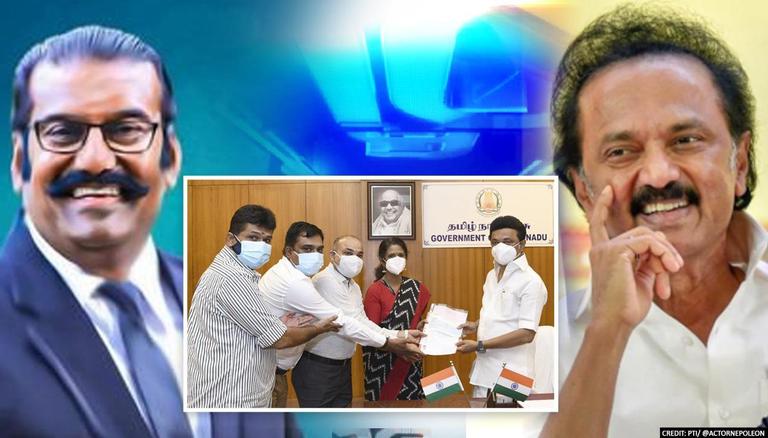 The actor took to Twitter and shared pictures where the representatives of Jeevan Technology India Pvt Ltd and Jeevan Foundation, Mr Suresh Periasamy, Mr Ashok, Mrs Vasanthi Babu and Mr Sitharaman handing over a cheque of Rs 25 lakh to CM MK Stalin on my behalf.

Notably, the actor himself was affiliated with the DMK from 1980-2014. During his time as a public servant, Nepoleon was once an MLA from Villivakkam constituency and then later between 13 June 2009 – 20 March 2013, he also served as the Minister of State for Social Justice and Empowerment. 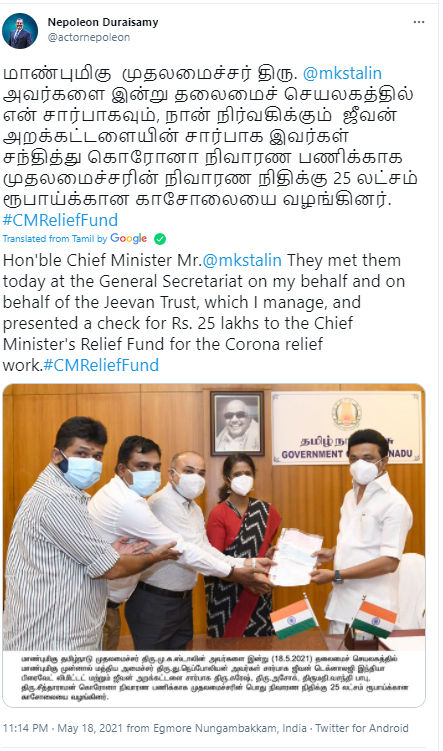 Before Napoleon Duraisamy, Chiyaan Vikram made an online contribution of ₹ 30 lakhs to the TN Chief Minister's relief fund to help the state government battle the deadly COVID-19 second wave. This comes after Chief Minister MK Stalin requested public and private organisations to come forward and make donations to the CMPRF on May 11. Following his appeal, celebrities from the Tamil film fraternity extended their support through donations. Among the other celebrities to have made donations included Suriya-Karthi and their father Sivakumar who donated Rs 1 crore, while Ajith donated Rs 25 lakh and Sivakarthikeyan donated Rs 25 lakh. Jayam Ravi and his father Mohan contributed Rs 10 lakh, while director Vetri Maaran donated Rs 10 lakh.

Who is Nepoleon Duraisamy?

Nepoleon is a veteran actor who has starred in over 125 south Indian films. He has acted in Tamil, Telugu, Malayalam and now in English as well.

Nepoleon Duraisamy forayed into IT Entrepreneurship and kick-started "Jeevan Technologies" IT operations in Chennai, India in the year 2000. Jeevan is a trusted technology transformation partner of enterprises across the globe under his able mentorship. In 2010, Napoleon established Myopathy, a unit of Jeevan Foundation, the Institute for Muscular Dystrophy & Research Center. It is a non-profit organization registered under the Tamil Nadu Trust Act.

India saw a record of 4,529 fatalities due to coronavirus in a single day pushing the COVID-19 death toll to 2,83,248, while 2,67,334 fresh infections were recorded taking the total tally of cases to 2,54,96,330, according to the Union Health Ministry data updated on Wednesday. The active cases have further reduced to 32,26,719 comprising 12.66 per cent of the total infections, while the national COVID-19 recovery rate has improved to 86.23 per cent, the data updated at 8 am showed.