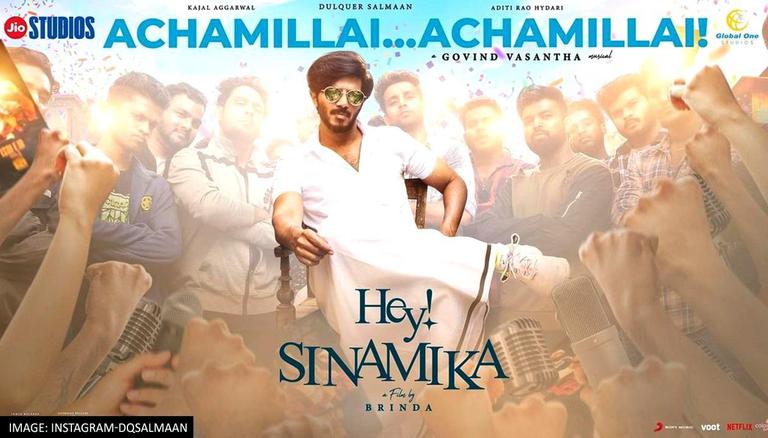 
After piquing fans' curiosity by announcing the release date of Hey Sinamika, Dulquer Salmaan has dropped the film's first single Achamillai, which is all about the actor flaunting his rapping skills and dance moves. The track's video clip showcases myriad BTS stills of the actor in a recording studio as well as fleeting glimpses of him grooving to the song.

Achamillai has been composed and produced by Govind Vasantha, while Madan Karky has penned its lyrics. The track was released on the occasion of Makar Sankranti and billed as an "Energy booster single". Helmed by Brindha Gopal in her directorial debut, Hey Sinamika also stars Kajal Aggarwal and Aditi Rao Hydari in pivotal roles.

Taking to his Instagram handle on Friday, January 14, the Kurup star uploaded the song's poster and wrote, "Energy booster single #Achamillai is out !!!! #HeySinamika #DQ33. Tunes by the most sensational musician #GovindVasantha Penned by enthralling lyricist @madhankarky. Sung by erm… Me !". Take a look.

Only days ago, he shared a sneak peek into how he turned rapper for the track via a video on Instagram. In the caption, he wrote, "Once you become fearless, life becomes limitless! Here's an exclusive glimpse from #Achamillai featuring yours truly singing for the very first time in Tamil. Song out on 14th Jan. #HeySinamika #DQ33."

On December 21, 2021, Dulquer Salmaan shared the first look from his upcoming film, where he can be seen in myriad jovial and charming avatars. Announcing that he'll play the role of a young man named Yazhaan, Salman wrote," "The wait is over, Presenting the super colourful FIRST LOOK. Yours truly as Yaazhan in #HeySinamika. Film to hit big screens on Feb 25, 2022 #DQ33FirstLook #DQ33."

The film has faced various postponements owing to the COVID-19 lockdown and will finally hit theatres on February 25, 2022. It is being bankrolled by Jio Studios, Viacom18 Studios and Global One Studios. Meanwhile, the actor was hailed for his latest performance alongside Sobhita Dhulipala in Kurup. He is also gearing up for the release of Salute, which stars Diana Penty, Manoj K. Jayan among others in pivotal roles.