Lakshmi Manchu Bumps Into Rajnikanth As Latter Shoots For 'Annaatthe', Shares A Selfie

Lakshmi Manchu recently took to her Twitter handle to share a selfie with Rajnikanth. The background hints towards Rajnikanth's visit to Mohan Babu's house. 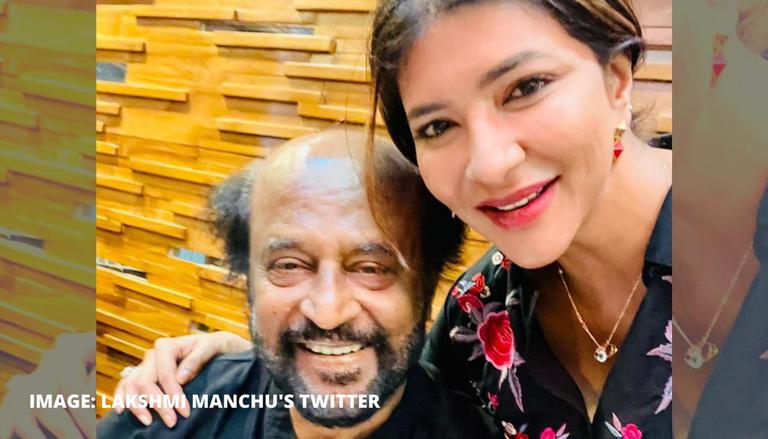 
Rajnikanth has been shooting for his upcoming film Annaatthe in Hyderabad since mid-April. The actor recently posed for a selfie with Mohan Babu's daughter and actor Lakshmi Manchu. The background in the selfie hints towards Rajnikanth's visit to Mohan Babu's house in Hyderabad. Read further to know more details.

Lakshmi Manchu recently took to her Twitter handle to share a selfie with Rajnikanth. She was wearing a black coloured floral shirt while Rajnikanth wore a black kurta. Both Lakshmi Manchu and Rajnikanth smiled at the camera as Lakshmi clicked a selfie. The background in the photo hints towards Rajnikanth's visit to Mohan Babu's house in Hyderabad during his shoot in the city. Lakshmi posted the photo without a caption. She just added heart and heart-face emojis with the photo. Rajnikanth's viral photo is being surfaced over the internet as his fans are waiting for his movie.

Annaatthe faced halts in its shoot multiple times since it was announced. The film first resumed its shoot in December 2020. However, due to a COVID-19 outbreak on the sets of the film, it faced a pause again. The makers of the film resumed the shoot in mid-April in Hyderabad as the production house, The Sun, tweeted a photo of Rajnikanth with the film's director, Siva. As per sources, Rajnikanth has wrapped up his shoot and is set to head home in Chennai Today, on May 12, 2021. Also, the Darbar actor will soon start dubbing for the film in Chennai. The rest of the team is still shooting in Hyderabad as Nayanthara joined them a few days ago. The director also has a shoot scheduled in Kolkata.

The film Annaatthe is Rajnikanth's 168th project. The makers of the film announced the release of the film is scheduled for the occasion of Diwali, November 4, 2021. It also stars Nayanthara and Keerthy Suresh in the lead roles.

As Rajnikanth is heading home after completing his shoot, he will fly off to the US for a routine check-up in June. His daughter Aishwarya, son-in-law Dhanush, and their children will join him on his trip to the US. Dhanush is reportedly shooting for a Hollywood film.