Jr NTR is celebrating his birthday on May 20, 2021, and Mahesh Babu wished Happy Birthday on Instagram stories; take a look at it here. 
Actor Jr NTR is celebrating his 38th birthday on Thursday and has been receiving wishes from fans, friends and followers on various social media platforms. One of these wishes was by actor Mahesh Babu, who took to his Instagram story to wish the former. Read further and take a look at the picture that Mahesh Babu shared of the two and what he had to say.

Jr NTR is turning a year older on May 20, 2021, and the RRR actor received a warm wish on his special day from Mahesh Babu. The latter took to his Instagram stories on Thursday morning to share a picture of them together and wished for NTR to have the best things in life. He wrote, “Happy Birthday Jr NTR. Wishing you happiness in abundance always. Take care brother!” and added a hug emoji; take a look at the picture, here. 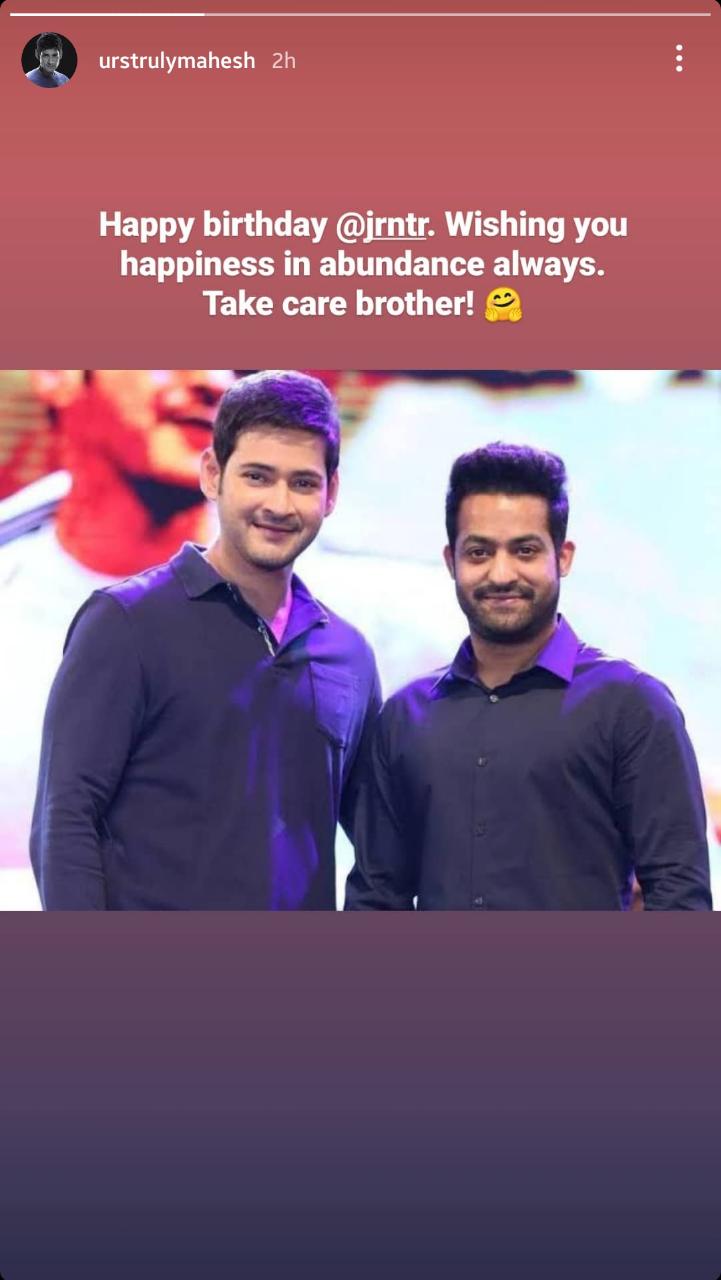 Mahesh Babu was last seen in the movie Sarileru Neekevvaru, which was directed by Anil Ravipudi and starred Rashmika Mandanna opposite the actor. Mahesh Babu also produced the movie and will now also be bankrolling the Adivi Sesh featuring movie Major, which is based on the life of late Major Sandeep Unnikrishnan who was martyred in the 26/11 terror attacks on Mumbai. The actor’s 2022 movie Sarkari Vaari Paata is also one of his most awaited movies, it will be helmed by Parasuram. The movie is expected to arrive in theatres by January 2022.

READ | Jr. NTR's Komaram Bheem look from 'RRR' to be unveiled on his birthday tomorrow

Jr NTR featured in the 2018 movie Aravinda Sametha Veera Raghava which was directed by Trivikram Srinivas. The movie also included Pooja Hegde, Eesha Rebba, and Jagapathi Babu while Sunil, Naveen Chandra, and Supriya Pathak in other pivotal roles. It releases in October 2018, with positive reviews from the audience. He will be seen next in the movie RRR, which stars him opposite Ram Charan and Alia Bhatt; and the actor will be seen playing the role of Komaram Bheem, who fought against the Nizam of Hyderabad. The movie’s release is slated for October 13, 2021.

READ | NTR Jr birthday quiz: Can you guess his movie name based on one-line plot description?