On Rana Daggubati's 37th birthday, his wife Miheeka Bajaj penned an adorable note for the South star, stating that the universe sent him 'as a present' for her 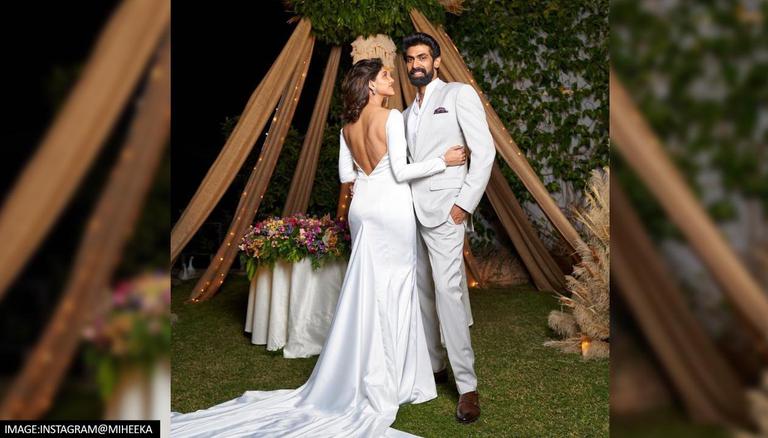 
Wishes are pouring in from the entertainment industry on the occasion of Telugu star Rana Daggubati's 37th birthday today. From Anushka Shetty, Sai Pallavi to Venkatesh Daggubati, the Baahubali star received heartfelt wishes from who's who of the South Indian film fraternity. Rana's wife Miheeka Bajaj has also poured out her heart while wishing her hubby via an Instagram post. Uploading a candid glimpse of the actor, Miheeka noted that the universe has sent him as a present for her.

She further praised her 'handsome' hubby and wished him luck for all his future endeavours. Rana Daggubati and Miheeka tied the knot in the midst of the COVID-19 pandemic last year. The private function had a select guest list including celebrities like Samantha Akkineni, Allu Arjun among other leading stars.

Taking to her Instagram handle on Tuesday, December 14, Miheeka uploaded Rana's picture, where he can be seen clad in a plain white shirt with black lowers as he binges on fresh fruits. For the caption, she wrote, "Happy birthday my handsome!! @ranadaggubati 💕You’re birthday is more a celebratory occasion for me than you because surely enough the universe sent you as a present 🎁 for me! May you achieve all you dream of and much more because you deserve the best of the best!! I love you!". Take a look.

Apart from the actor's fans, Anil Kapoor's wife Sunita Kapoor as well as ace designer Arpita Mehta wished him via the comments section. Meanwhile, Rana's close friend and actor Anushka Shetty shared a throwback picture with the birthday boy and wrote, "Happu Happu Happppppuest bday brooo. wish u the bestest in life with lots of Love." His uncle and actor Venkatesh Daggubati also uploaded a throwback picture of the duo and wrote, "A very happy birthday dear Rana! Hope this year brings you an abundance of joy, good health and prosperity. Lots of love."

On the work front, Rana, who was last seen in Kaadan, is gearing up for the release of 'his upcoming Telugu actioner Bheemla Nayak. The actor will be seen alongside powerhouse Pawan Kalyan, with the film slated for a January 12, 2022 release.