Adivi Sesh was recently seen in 'Major', in which he played the martyr Sandeep Unnikrishnan, who put his life on the line during the 26/11 Mumbai attacks. 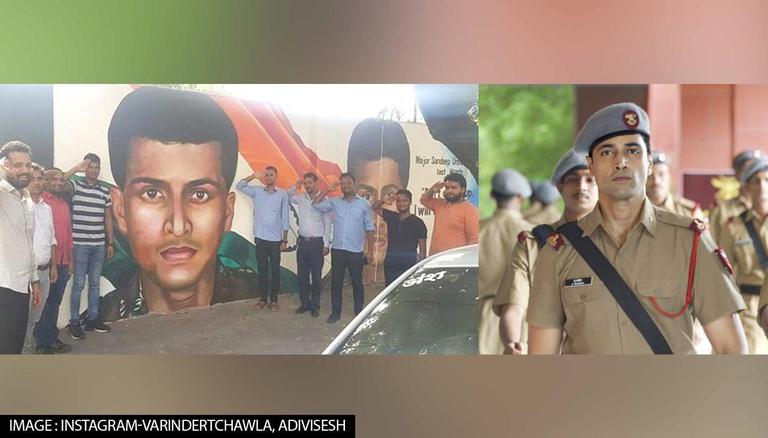 
Popular actor Adivi Sesh was most recently seen in his film Major, in which he took on the role of the martyr Sandeep Unnikrishnan, who put his life on the line during the 26/11 terrorist attack in Mumbai. The attacks took place in the city's Taj Palace Hotel in 2008 and shook the city to its core.

Citizens are now paying tribute to the sacrifice of Major Sandeep Unnikrishnan with creative graffiti in Mumabi after the release of the film.

Popular entertainment photographer from the city, Varinder Chawla, shared a picture of some creative works of art painted on a wall near the Taj Palace Hotel, which pays tribute to Major Sandeep Unnikrishnan. The wall sees the late Major's face painted on it, against the background of the Indian flag. Several individuals can be seen saluting him and his work in the pictures uploaded online. The graffiti also includes the martyr's final words to his team, "Don't come up, I will handle them." They also wrote, "Mumbai will never forget you."

Have a look at the graffiti here:

Adivi Sesh was seen stepping into the role of Major Sandeep Unnikrishnan in the film and was hailed for his performance on screen. He was joined by Sobhita Dhulipala, Saiee Manjrekar, Prakash Raj, Unnikrishnan, Murali Sharma, Revathi and others, who played pivotal roles in the film. The film was helmed by Sashi Kiran Tikka and hit the big screens on June 3, 2022. According to Indian Box Office, the film has minted 58.2 Cr in its worldwide nett, with a whopping 45.2 Cr earning from India.

READ | Adivi Sesh gears up for 'Goodachari 2' post 'Major' success; says 'it will be massive'

Who was Major Sandeep Unnikrishnan?

Major Sandeep Unnikrishnan was among the martyrs of the 26/11 Mumbai terror attacks who led the commando operation launched to rescue hostages from the Hotel Taj Mahal while it was under attack. He was martyred after he brought 14 hostages to safety and also managed to single-handedly corner terrorists in the Ballroom at the hotel. However, he laid down his life in doing so, and the terrorists were later eliminated at the location in the Taj.