Nagarjuna Akkineni announced that the shoot of 'Bangarraju' has been completed. With this, he also posted a picture of one of the dance numbers from the film. 
Actor Naga Chaitanya has completed shooting for his upcoming film Bangarraju. Nagarjuna Akkineni announced that the shoot of Bangarraju has been completed on Twitter. With this, he also posted a picture of one of the dance numbers from the film.

The actor took to his Instagram handle and posted a picture, where Naga Chaitanya and Krithi Shetty could be seen making moves on a dance number. He wrote, "Last day of the shoot!! Another peppy dance number loading.!! (sic)"

The picture shows Naga Chaitanya in a red silk kurta and Krithi Shetty donning a saree. So far, the makers of Bangarraju have released three songs from the film, namely Laddundaand, Naa Kosam and Chittti, which have been received positive resposes from audiences.

In a recently released song, Ratnalu fame Faria Abdullah could be seen shaking a leg with Nagarjuna. The music is composed by Anup Rubens and the film has been jointly produced by Nagarjuna's home banner. 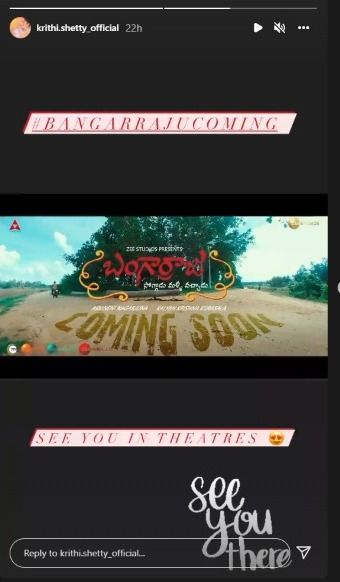 Meanwhile, the female lead of the movie, Krithi Shetty, has also shared the wrapping up of the shoot on her Instagram handle. The actor posted a dance number in one of her stories and wrote, "#BanarrajuComing See you in theatres (sic)."

Bangarraju is an upcoming Indian-Telugu language supernatural tale, directed by Kalyan Krishna. Produced by Annapurna Studios and Zee Studios, the film serves as a prequel to the 2016 Telugu film Soggade Chinni Nayana, wherein Nagarjuna played a similar role. It marks their second collaboration after the 2014 Telugu fantasy drama Manam. Besides, Naga Chaitanya, Krithi Shetty and Nagarjuna, the film also stars Ramya Krishna in the lead role.

READ | From Samantha-Naga Chaitanya to Kim-Kanye: Celebrity couples who called it quits in 2021

Bangarraju is slated to release in theatres on 15 January 2022. Naga Chaitanya had earlier given stellar performances in films like Manam, Bangarraju, Us and Premam. He is also ready to be a part of Aamir Khan's Laal Singh Chaddha, an upcoming Indian Hindi-language comedy-drama film. Bankrolled by Aamir Khan Productions, the film will star Kareena Kapoor Khan and Mona Singh in lead. Helmed by Advait Chandan, the screenplay of the film is written by Eric Roth and Atul Kulkarni.