Nithiin and Krithi Shetty starrer 'Macherla Niyojakavargam' have finally started their shooting schedule as the team gathered to mark its first day. 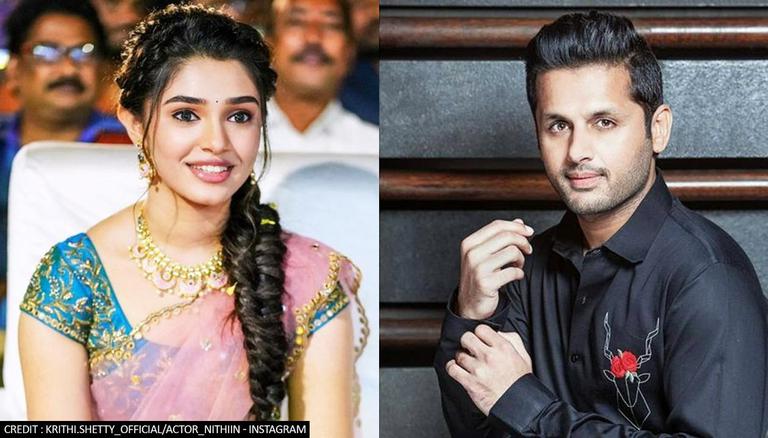 
Currently on the roll with one hit after another, South Indian actor Nithiin has started filming for another highly anticipated film Macherla Niyojakavargam opposite Krithi Shetty. The actor took to his social media to announce the commencement of the film with an exciting video featuring his female lead and the team. Read on to know more about the upcoming action flick.

Taking to his social media, the 38-year-old actor shared the video of the cast and crew gathering to mark the commencement of the action flick. Krithi Suresh was seen donning a red traditional outfit to perform the rituals. The team appeared exciting as they performed the pooja ceremony and blessed the cameras and flapper board. Nithiin shared the video writing, ''Glimpse of Youth star@actor_nithiin’s #Nithiin31 Pooja ceremony''.

In some of the pictures retweeted by the actor, he was seen posing along with the flapper board with Shetty and director Rajashekhar Reddy. Fueling the excitement of his fans even further, the actor shared the first motion poster of the film hinting at the high octane and intense action in the film. In the video, shared with the caption, ''MACHERLA NIYOJAKAVARGAM Earphones pettukondi Volume penchandi Mana niyojakavargam lo ki ENTER AVVANDI'', the audience witnessed Nithiin exude power while being surrounded by gangsters and flames. He also described the motion poster as ''the Gutsy Title & Motion Poster''

More on Nithiin and Krithi Shetty

Dubbed as one of the most sought after actors in the South film industry, Nithiin forged an impressive resume with multiple blockbusters and a number of successful movies. He is known for his roles in movies like Courier Boy Kalyan, Srinivasa Kalyanam, Rang De and his soon to be released Maestro. On the other hand, Shetty is already on the path of becoming a well-established actor as she has several movies lined up in her pipeline with the likes of Aa Ammayi Gurinchi Meeku Cheppali and Bangarraju.