Nivin Pauly has nothing but kind words for his 'Mahaveeryar' team as the movie completes shooting on April 20, 2021. Read about Nivin Pauly's upcoming movies.


Nivin Pauly and his team have successfully completed the shooting of his upcoming movie Mahaveeryar. The Mollywood actor has posted a special thanks to the entire team of Mahaveeryar in an Instagram post with a picture of a clapboard with the movie name written on top and the words "PACKED UP" declaring the wrap up of the shoot. The clapboard marked the date April 20, 2021, as the official date of the end of shooting for Mahaveeryar.

He credited the director Abrid Shine in the post along with his co-stars Lal, Shanvi Srivastava, Siddique and Asif Ali among others. The actor posted a special thank you to the entire technical team in the caption including Chandra Mohan Selvaraj, Anees Nadodi, Melwy, Ishan Chabra and others. He also thanked his fellow producer Shaman PS in the appreciation post.

Nivin Pauly's fans joined him in celebration of the joyous occasion. He also received a special wish from Mr Universe 2019, Chitharesh Natesan. Pauly's fans expressed how they were eagerly waiting for the release of the movie in theatres and sent their congratulations for the wrap-up of the movie. They also dropped hearts emojis and fire emojis in the comment section of the post. Nivin Pauly's picture received more than 59,000 likes. 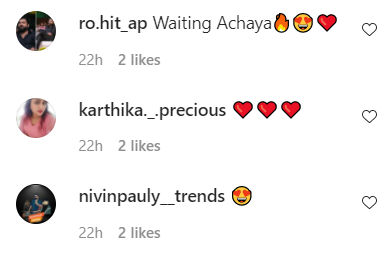 The team of Mahaveeryar had announced the traditional pooja ceremony and the list of the star cast members of the movie in a separate official handle of the movie. They announced that the movie had gone on floors in Rajasthan on February 25, 2021. The movie was completely shot during the pandemic. The movie's Instagram page too announced the pack up and said that they had successfully completed filming even after being surrounded by the fear of the Coronavirus pandemic.

Aside from Mahaveeryar, Nivin Pauly is expecting the release of his film Thuramukham in 2021. Currently, the movie is in its post-production stage. Thuramukham is set to be a historical drama film helmed by Rajeev Ravi and written by Gopan Chidambaram. Actors Indrajith Sukumaran, Poornima Indrajith, Sudev Nair, Darshana Rajendran, and many others will be seen in the supporting role in the movie.